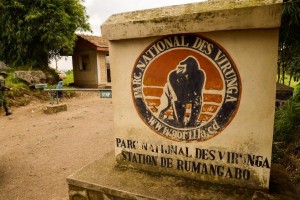 An access to the Virunga National Park is seen near Rutshuru on June 17, 2014 (AFP Photo/Junior D. Kannah)[/caption]

On the question of “whether there is an oil field” underneath the park, the study answered “yes”, he said, without giving further details.

The announcement was likely to reignite a heated debate within DRC over the merits of exploring for oil in the vast park, which covers some 7,800 square kilometres (3,010 square miles) of lush forest, glaciated peaks and savannah in the restive eastern province of North Kivu.

The UNESCO world heritage site reopened to tourists last year after being closed for two years because of militia violence in the region.

UNESCO has warned several times that any exploration for oil in the park would be “incompatible” with its heritage status. The Congolese government has in the past promoted prospecting for oil in Virunga as offering a chance to lift the vast country out of poverty. Critics warn, however, that the oil business would only exacerbate the armed conflicts that have torn North Kivu apart for more than two decades. “If the government tried to exploit this oil, for us it will be death,” the head of a local environmental NGO, Bantu Lukambo, told AFP. In 2010, the government awarded several oil concessions straddling the park’s boundaries, including giving “block V” to Soco, but suspended the permits following a domestic and international outcry.

London-based Soco was accused of corruption and intimidation by several NGOs — charges it denies — and a statement on the company’s website said it no longer holds the licence for the block.

Soco has since been allowed to carry out tests to establish the environmental impact of possible oil exploration in the park, however, and opponents fear the government may award the licences to another company.