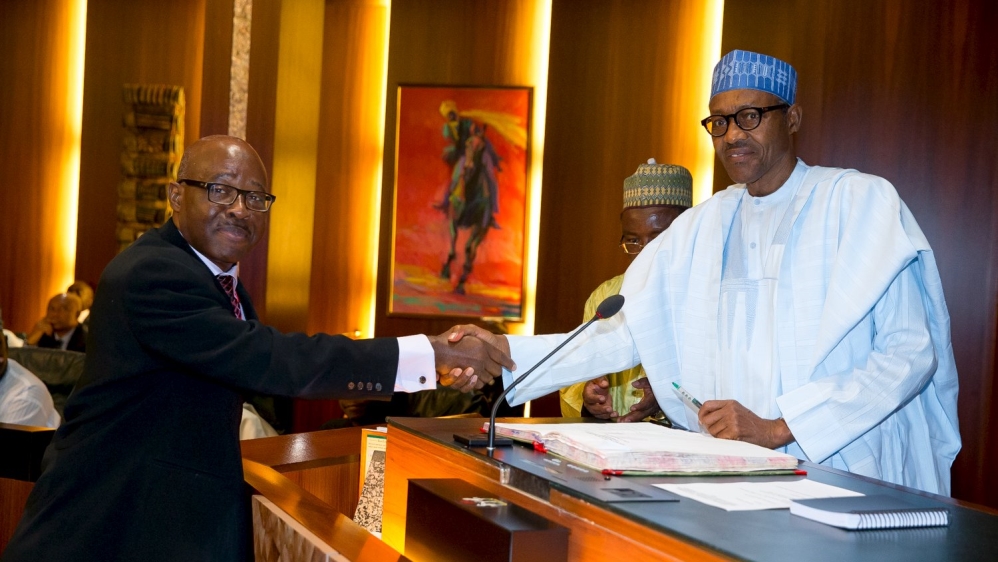 Nigerian President Muhammadu Buhari has sworn 36 ministers into his cabinet five months after his inauguration.

Buhari, who took office on May 29, won a general election in March after vowing to crack down on corruption in Africa’s biggest economy and top oil producer.

He has been criticised for taking until September to name his ministers at a time when the economy has been severely hit by the fall in oil prices.

“Today we have reached another milestone in the evolution of our new government which Nigerians overwhelmingly voted into office in March 28 this year,” he said during the swearing-in ceremony on Wednesday.

The long-awaited cabinet is smaller than that of his predecessor, Goodluck Jonathan, who had 42 ministers.

Under the constitution, the president must include a member from each of the country’s 36 states.

Buhari called on the newly sworn-in ministers to focus on tackling the many challenges Nigeria currently faces.

“Our new ministers must proceed to work speedily and do their utmost to justify the confidence we have placed in them not only by their conduct but also by their performance in their various positions,” Buhari said.

“Regardless of the present challenges we are confronting, I believe all Nigerians will keep hope alive and sustain their optimism about the future of our economic well-being.”

Most cabinet members are political veterans, many of whom were key players in Buhari’s election campaign.

The new cabinet will have to confront slowing growth, caused by a collapse in oil revenues that has weakened the currency, the naira, slashed government revenues and driven up inflation.

The government also needs to win back investors upset by hefty foreign currency restrictions imposed by central bank governor Godwin Emefiele, who filled a vacuum in the absence of a finance minister.