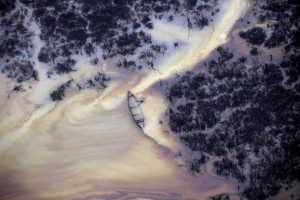 FILE – In this March 24, 2011 file photo, oil is seen on the creek water’s surface near an illegal oil refinery in Ogoniland, outside Port Harcourt, in Nigeria’s Delta region. Amnesty International says oil giant Shell’s claims of cleaning up spills that have destroyed the livelihoods of hundreds of thousands of Nigerians are “false.” A report issued Tuesday Nov. 3, 2015 quotes one contractor as saying his clean-up was “a cover-up.” (AP Photo/Sunday Alamba, File)[/caption]

The major policy shift fits new President Muhammadu Buhari’s plan to halt corruption endemic in the industry in Africa’s biggest oil producer. The previous administration of President Goodluck Jonathan had ignored warnings from Central Bank Governor Lamido Sanusi that some $20 billion in oil sales over three years was missing from federal coffers, and instead fired Sanusi.

Nigeria produces 2 million barrels of crude a day, according to the corporation’s website. Nigerians consume about 9 million liters (2.4 million gallons) of gas daily, almost all imported because local refineries are inefficient. One barrel of crude produces about 30 gallons of diesel or fuel. A statement from spokesman Ohi Alegbe said the decision was made after a screening of previously used and prequalified petroleum product importers revealed almost all the 34 international and 10 local companies were middleman businesses.

The shift is “a major steer designed to enshrine transparency and eliminate the activities of middlemen in the crude oil exchange,” said the statement from the corporation’s new management. One of Buhari’s first acts as president was to fire all the old managers.

Corruption that thrived under Jonathan’s watch had favored officials being sold entire shipments of crude at favorable rates so they could pocket the profits. The U.S. Department of Justice warned Buhari earlier this year that one minister had pocketed $6 billion from oil sales.

The massive thefts came as oil prices topped $110 a barrel. Now Nigeria is in crisis, with halved prices for the oil that provides 80 percent of government revenue and Buhari has complained he inherited an emptied treasury.