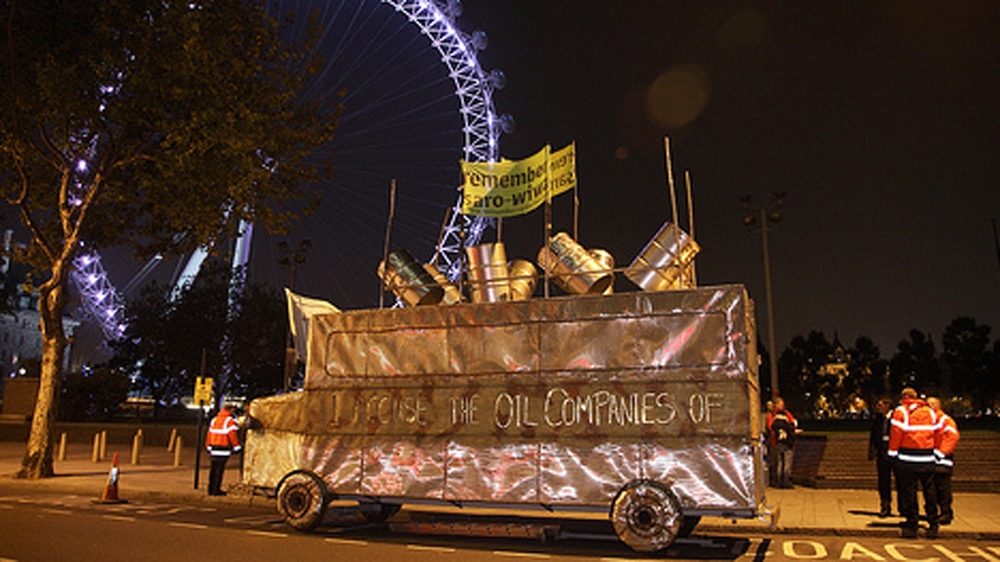 The Nigerian government impounded a bus created as an artistic memorial to commemorate the 20th anniversary since the hanging of environmentalist Ken Saro-Wiwa.

Tuesday marks 20 years since the execution of Saro-Wiwa and eight other Nigerian human rights activists by Nigeria’s then-military government.

They had led protests against environmental damage in the oil-rich Niger Delta region caused by oil giant Shell. They were hanged, despite an international outcry, for their alleged involvement in the murder of four Ogoni tribal leaders.

The trial was seen as having been rigged by the military rulers for deals with Shell and other oil companies operating in the Delta, and the executions led to the suspension of Nigeria from the Commonwealth, along with other sanctions.

A protest was held Tuesday against the Nigerian government’s decision to block the entry of the sculpture.

The art – in the form of a blackened steel bus – was impounded by custom officials upon arrival at the Lagos port on September 8.

The sculpture, made by the Nigerian-born artist Sokari Douglas Camp, was impounded because of its “political views”.

Al Jazeera: Why did you make this art sculpture?

Douglas Camp: I won a competition to make an art piece to honour Ken. I was asked to construct a memorial piece. He was Africa’s first environmental activist – a slightly controversial figure but a very important one. He deeply cared for his people and the environment. I was over the moon when I was chosen. I made the bus nine years ago in 2006.

AJ: How does it make you feel – the government’s move to impound the bus?

DC: I feel very disappointed. It is clear we haven’t progressed much, a quiet backward step. I’m sad that the bus isn’t going where it was meant to go. The bus is supposed to be an emblem for the clean-up of the Niger Delta. It was meant to stir up debate and encourage action. Why will anyone want to stop that?

AJ: Do you think the sculpture will have made any difference to the environmental pollution in the Niger Delta?

DC: First, the idea was to educate the people in Britain about the plight of the Ogoni people and to highlight their suffering. Shell’s connection to the UK made this even more important. The bus travelled across the UK doing precisely that. It generated a lot of attention to the Ogoni people’s plight. We even had musicians singing next to the bus.

AJ: Have you met Ken Saro-Wiwa or his family?

DC: Ken Jr was part of the panel that chose my art piece in the competition that I won. The Saro-Wiwa family have been very supportive. They didn’t want figurative art. They wanted a conceptual and versatile work. The bus ticked all these boxes.

AJ: Do you remember the first time you came across Saro-Wiwa’s work?

DC: Growing up in Nigeria, I used to see his sitcom on TV. It was very funny. I’ve also read much of his great work. He was a very talented writer. An award-winning writer. My brother also used to work with Ken. So I know Saro-Wiwa and his work very well.