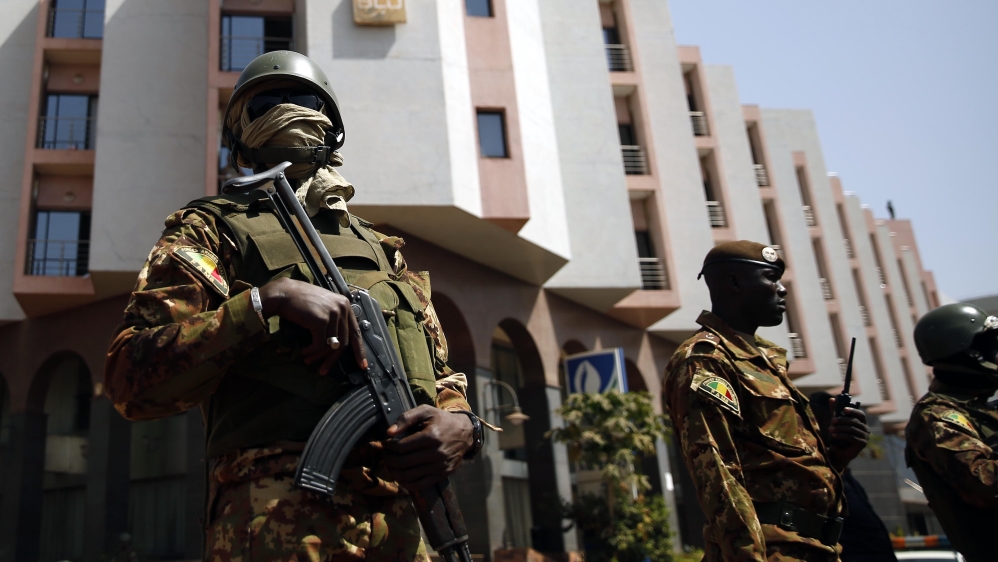 Mali’s president has questioned claims that al-Mourabitoun, an al-Qaeda linked group, was responsible for last week’s assault on a luxury hotel in the capital Bamako.

In his first interview since Friday’s attack that left 27 people dead, President Ibrahim Boubacar Keita told Al Jazeera that despite early speculation, his intelligence suggested that another group, the Macina Liberation Front, was responsible for it.

“Initially it was said that this was the work of al-Marabitoun but tonight all indications are it is the Macina Liberation Front who are behind this,” he said.

“They’re acting as if Macina was a country or territory that needed to be liberated. At this precise moment I have no more details.”

The November 20 assault on the Radisson Blu hotel was the latest in a series of deadly raids this year on prominent targets in Mali, which has battled various armed groups based in its desert north for years.

Members claiming to be part of al-Mourabitoun quickly claimed responsibility for the attack, saying it carried it out ” in coordination with Imarat al-Sahra group and al-Qaeda in the Islamic Maghreb [AQIM]”.

While the attack was under way on Friday, Al Jazeera gained access to a recording in which assailants claiming to be part of al-Mourabitoun said they would only release the hostages it had taken when its members were freed from Bamako’s prisons, and when what they called “aggression against the people of northern Mali” was stopped.

Little is known about the affiliations of Macina Liberation Front, though it has been credited for a series of attacks on Malian troops and civilians over 2015.

Responding to reports quoting witnesses that the hotel attackers spoke English, Keita told Al Jazeera: “My intelligence is working on this. … We are processing the information but it could mean many things.”

The attack in Bamako is a sharp setback for France, the region’s former colonial power which has stationed 3,500 troops in northern Mali to try to restore stability in a region ridden with competing armed groups.

Al Jazeera’s Mohamed Vall, who has reportedly widely from Mali and Mauritania, said the hotel assault underscored the “fragility of the Malian government”.

“Bamako has been supposedly in a state of alert since the latest Tuareg rebellion in 2012. You can only imagine that the government has been taking all necessary measures to protect its high-value assets including international hotels,” he said.

There were some suggestions that the attacks proved that Mali’s government was slowing losing control of the country, a claim also rejected by President Keita in his interview to Al Jazeera.

“I’m the captain of this vessel,” he said. “My decisions are my own decisions.”