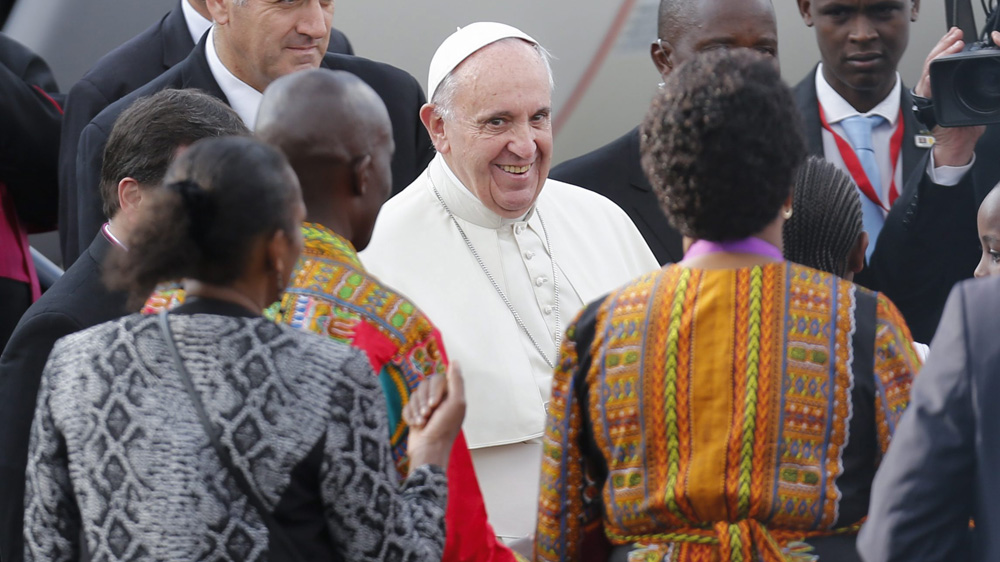 Nairobi, Kenya – Tens of thousands of Kenyans travelled to the centre of Nairobi today for a chance to attend a Mass with Pope Francis on his first visit to the continent. Rain poured down on the crowds, some of whom had spent the night outside the custom-built chapel in downtown Nairobi.

Roads were closed for the papal motorcade. Pope Francis waved to the crowds from inside a small Honda, while Kenyan officials arrived in luxury cars. In his sermon, the pope denounced corruption and called for a more just and inclusive society.

The pope’s visit to Kenya is the first stop on his three-country African tour. He next visits Uganda and the Central African Republic to address a number of pressing concerns including climate change, conflict resolution, corruption, and interfaith tolerance.

Kenya has suffered dozens of attacks at the hands of Al-Shabaab in recent years. Tens of thousands of security personnel stood guard around the mass, a show of increased vigilance. Many in the crowds prayed that the visit could reset and reunite the country.

The people sang, danced and took communion, constantly trying to avoid slipping in the mud. Some celebrated the rain, claiming that it was a sign of blessing in Kenya.

Here are a few of the people who travelled across Kenya to share Mass with the pope.

Joseph Kariuki and Peter Njogu are friends who travelled to Nairobi from Nakuru several hours to the north. They arrived at 9:00 last night for the chance to attend the Mass with the pope, sleeping under a highway underpass next to the custom-built chapel.

“I came to celebrate Pope Francis. The pope likes the poor, people who have small things, and only want small things,” said Mr Kariuki.

Heron Ogato travelled from Kisii in far western Kenya to attend Mass. He brought an obokano, a traditional Kisii instrument that sounds like a stand-up double bass.

“I play my obokano every Sunday in church,” Ogato said.

“We are hoping the pope will bring peace, and bring the people of Kenya together.”

Paul Mwangi came from Nairobi, excited to see the pope. He was even more excited to make some money, he said.

“I came for business! I have sold many umbrellas,” he said as the steady rain ran off his flowery umbrellas.

Leonard Mwanze drives a motorcycle taxi in Eastern Kenya. He made the journey to Nairobi to celebrate Mass.

“We wish we had a clear view of the Pope! It’s such a blessing for him to be here in Kenya.”

Juvenales Osumo is a preacher in Nyamira Country, 200 kilometres from Nairobi.

He travelled with his friend John Tonda, who works as a farmer, to get a peek at the pope and attend Mass.

An estimated 15,000 police officers and soldiers patrolled downtown Nairobi, some on horseback.

A group of young worshippers from St Joseph the Worker Church sold T-shirts and traditional cloth emblazoned with the face of Pope Francis.

The Pope will visit their church in the Kangemi slum on Friday.

Sister Eva Kaninyuzi hails from Uganda but now belongs to the Sisters of Mary Immaculate Order in Nyeri, 150 kilometres from Nairobi.

Pamela Keleka belongs to a parish in western Kenya.

“We Catholics feel blessed that the Holy Father is here. He represents Jesus Christ himself. It’s raining, which is a blessing. We are so happy. When you have a wedding in Kenya and it hasn’t rained people feel that you are not blessed. Once it rains they feel you are blessed with an abundance of food, children, that you will not lack anything.

“Our president requested the pope pray for him. We have a lot of problems with security and corruption. The Lord in Heaven will hear the request and bless us in Kenya.”

“Now that the pope has come to our country it was important to see him physically and to hear the message he has for Kenyans. Today he has spoken and we have heard. He values children, peace, and dignity in human nature, and we are very grateful for his coming.

Diana Shamala, 16, came from a nearby school in Kitale and travelled on the bus with Murumba and her students.

Four-year-old Diana Nyaga missed Mass because of the rain. She stood with her parents outside the chapel area, hoping to catch a glimpse of Pope Francis as he drove by.

Angelo Kabuti came with his family.

“It’s important to spread the word about Catholicism around Kenya,” said Kabuti.

Angelo’s father Henry worked as an engineer in constructing the chapel where the pope gave his sermon.

“He’s come to give us support, encouragement, hope, and the grace that is necessary to drive the country forward. It comes at a time when Kenya is at a crossroads. Hopefully this will be a starting point for the country to unite and move forward as one,” said Henry.