Frontier 100 Forum, signaling a growing recognition that African businesses are moving beyond their local market to enter the world-class space. IGD is a U.S.-based organization that harnesses the power of the private sector to create inclusive growth and alleviate poverty in Africa. [caption id="attachment_22268" align="alignleft" width="600"] 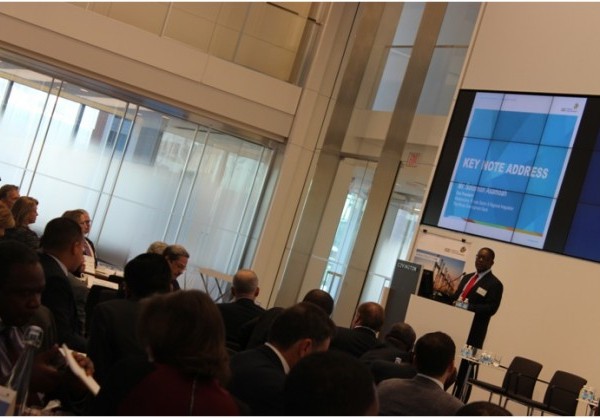 Solomon Asamoah, African Development Bank’s Vice President of Infrastructure, Private Sector and Regional Integration, during his keynote speech.[/caption] Under the theme, “African Business in the World-Class Space”, global business leaders gathered for IGD’s Frontier 100 Forum, an exclusive, invitation-only gathering held from October 19-21, in Washington, DC, where they examined the tremendous opportunities and challenges that African companies face in reaching the world-class space and offered business strategies to successfully operate in the global marketplace. The biannual event brings together CEOs and senior executives from IGD’s Frontier Leaders Network of U.S., African, European and South Asian companies. More than half of IGD Frontier Leaders hail from the African continent. Dr. Mima Nedelcovych, IGD President & CEO pointed out that when he served as the U.S. Executive Director to the African Development Bank two decades ago, Africa’s private sector was neither strong nor well-developed. “Today, Africa’s private sector is poised to become a major force for growth on the continent,” said Nedelcovych, citing that African born and bred businesses create more than 80 percent of jobs in their countries. In a keynote address, Solomon Asamoah, African Development Bank’s Vice President of Infrastructure, Private Sector and Regional Integration, called for African governments to develop stronger business environments for companies to flourish. Asamoah said stronger business environments would involve government leaders putting in place consistent policies, increasing capacity and incentives for the government workforce, renovating airports, and transparency around the decision-making process to address corruption. “We need more transparency in government decisions. Corruption happens in darkness. Shining a light on it can help end the problem,” said the AfDB’s top private sector official. During the session on African companies operating in a world-class space, African business leaders said armed with local knowledge and insight into the African context, they are finding African solutions to overcome some of the obstacles to competing in the global economy. Abdu Mukhtar, Chief Strategist for Dangote Group, the largest industrial conglomerate in West Africa, said his company routinely faces transportation and logistical bottlenecks in transporting goods by road throughout Africa. The Dangote Group is addressing transportation challenges by importing their own vehicles and reaching out to governments on improving infrastructure and regulations to ease the flow of travel between countries. Global misperceptions on doing business in Africa still exist, despite the fact that the continent is home to some of the world’s fastest growing economies. “Fire starters” or pre-selected forum participants ignited a spirited discussion on how to shape the narrative on Africa. Some blamed the media and aid organizations for negative narratives on Africa, but Amadou Mahtar Ba, Co-Founder and Executive Chairman of AllAfrica Global Media Inc., said there needs to be greater engagement from business leaders on changing Africa’s narrative. Rahel Getachew, an international marketing expert, added that how companies market their products from the product quality to user engagement also informs and influences the narrative. Demba Ba, Senior Advisor of the World Bank’s MENA Vice Presidency, spoke about fully embracing Africa’s narrative — both the good and the bad. “Africa is a land of several pieces, not all of it is perfect,” said Ba. As innovation occurs at a rapid pace across Africa, the concept of “leapfrogging” is seen as a driving force in helping to advance Africa beyond current growth estimates. A diverse panel from the private and public sectors explored ways that businesses can incorporate innovation into their company culture and governments can nurture an environment for innovation. “The future of growth is coming from Africa and it’s mobile,” said Stephen Kehoe, ‎Senior Vice-President and Head of Global Financial Inclusion at Visa. For example, Kehoe said Visa worked with the government of Rwanda to expand access to innovative financial services through electronic payments, such as mVISA, a Visa mobile money service. Ambassador Mathilde Mukantabana of Rwanda said her government intentionally sought to create an environment to foster innovation and entrepreneurship. In the late-1990s, the landlocked country invested heavily in technology to attract private sector investments, which has led to greater economic development. “It was a combination of political will and initiatives such as empowering women that helped us engage various sectors of the economy,” said Ambassador Mukantabana. Panelists in the session on “mainstreaming” Corporate Social Responsibility (CSR) into the fabric of companies highlighted CSR initiatives that improve whole communities through programs such as building schools and clinics or evaluating environmental impacts before embarking on a new business phase. Jean-Louis Ekra, former Chairman and President of African Export-Import Bank underscored that CSR should not be viewed as “something that businesses have to do”, but “something that they want to do”. For Ekra, this means encouraging businesses to take part in building local capacity and instituting environmentally-friendly policies. Heather Kulp, Deputy Director of the Niger Delta Partnership Initiative (NDPI) Foundation, established by Chevron Corporation, urged companies to adopt a “shared value” approach where businesses build partnerships that leverage regional knowledge and address the root causes of social challenges with local solutions. “What we’re talking about at NDPI is shared value. How do we create systems where both business and communities benefit?” said Kulp. IGD has partnered with NDPI and The Foundation for Partnership Initiatives in the Niger Delta (PIND) to conduct an impact assessment of their program. The Forum concluded with a half-day investor conference where private equity fund managers had a frank discussion among themselves to “pull the curtain back” on what investors say about investing in Africa. Business leaders operating in Africa shared their perspectives on the discussion in a session that followed. The Initiative for Global Development (IGD) is a 501©(3) organization that engages and harnesses the power of the private sector to create sustainable growth and alleviate poverty in Africa.  IGD brings together an influential Frontier Leader network of CEOs and senior executives through the Frontier Leader Network to catalyze greater business investment and impact on the continent. Former Secretaries of State Madeleine K. Albright and General Colin L. Powell are co-chairs of IGC’s Leadership Council. *APO]]>