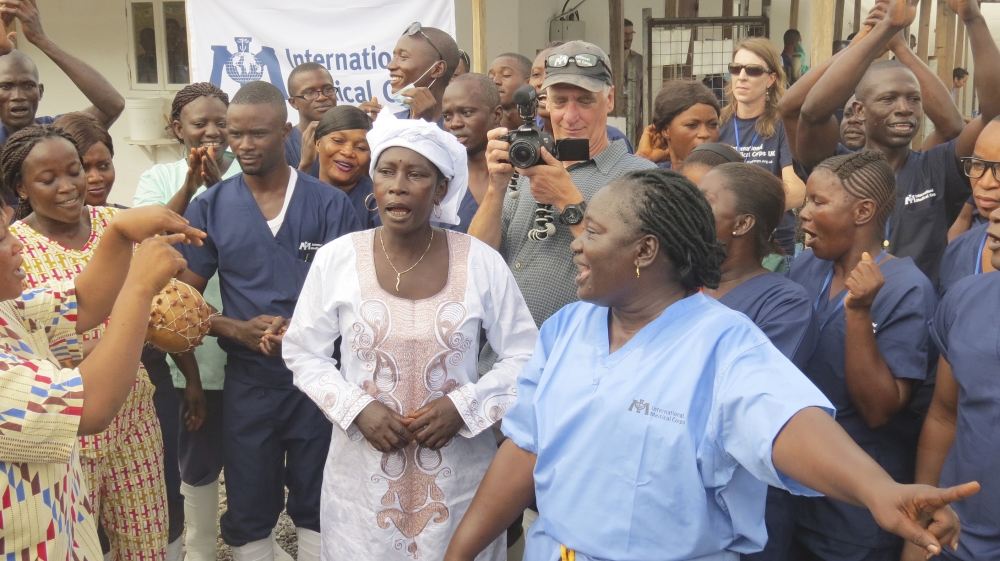 Freetown, Sierra Leone – A year and a half after the Ebola outbreak began there is at last good news for Sierra Leone.

On Saturday it is expected the country will reach 42 days since the last recorded case, meaning it will be officially declared Ebola free.

Many of the almost 4,000 Sierra Leoneans killed by Ebola were medical personnel, says the World Health Organization. The small West African nation suffered the most cases and healthcare has “been extremely compromised with a disproportionate number of workers dying”, according to a report on the United Nations’ ReliefWeb site.

While rebuilding efforts will no doubt focus on doctors, supplies and facilities, experiences during the epidemic indicate that resuscitating Sierra Leone’s moribund health system will be as much a cultural endeavour as it is a medical one.

In African nations such as this, traditional healers play a key role in society – and medical experts say their help will be vital in dealing with any future disease outbreaks.

“Traditional healers were largely ignored by the state and the international community throughout the early to mid-stages of the Ebola response,” said Richard Mallett of the Overseas Development Institute’s Secure Livelihoods Research Consortium (SLRC).

When Ebola first came to Sierra Leone in May 2014, many people refused to accept that the disease could be tackled through Western medicine, opting instead for traditional treatments with herbs, potions and spells provided by the country’s estimated 45,000 healers.

Its first confirmed Ebola case was a young woman whose infection was traced back to a well-known traditional doctor, who was exposed when treating Guineans who’d crossed the border to seek her aid. Epidemiological tracing linked 365 Ebola deaths to that healer, who also succumbed to it.

Traditional medicine was outlawed as part of emergency measures but, as authorities struggled to contain the epidemic, healers were brought back to help fight the virus. They played an important role in educating people about how to properly avoid and treat Ebola, helping to stop its spread.

“[Authorities] found out that avenues had been exhausted but still Ebola had not come to an end,” said Abdul Bangura of the Sierra Leone Indigenous Traditional Healers’ Union. “So what are we going to do? The best thing we can do is call on our traditional healers, because we know our people.”

Mallett and his colleague Lisa Denney, who studied Sierra Leone’s health system, say the failure to include healers at an earlier stage may have prolonged the outbreak and increased its death toll.

When Ebola first emerged, many Sierra Leoneans believed it was a curse. As the virus spread, so did feverish rumours that medical personnel were injecting patients with Ebola or using their blood to gain supernatural powers.

Mallett and Denney’s research indicates such rumours were made believable by negative experiences many Sierra Leoneans reported with rude or unhelpful medical staff in a clinical setting they found to be intimidating and unfamiliar. Thus, at the peak of the crisis, patients would seek care from local healers they knew and trusted.

Sierra Leone has just 1.9 health professionals for every 10,000 people in the country, according to the World Health Organisation, while Amnesty International says there is an average distance of almost 18km to a health facility.

By comparison, Bangura said, “there is no village in Sierra Leone that doesn’t have a traditional healer”. He is frustrated that “the conventional doctors, every month they receive salary” while traditional healers working as part of the Ebola response “are moving from district to district, without even getting money for gas”.

Al Jazeera visited one of these traditional healers in the crowded Freetown slum of Kroo Bay.

Kadiatu Kamara works from her two-room shack, offering cures for ailments that range from sinusitis to demonic possession. Her most popular service is to “help people succeed in love” – which involves a cheaper and less complicated ritual than other treatments.

As part of the rite, she instructs her patients to wash with tar-like soap and an opaque brew of herbs and aerosol deodorant. They then knot a cut of kaleidoscopic fabric around their waist three times – incanting their romantic wishes with each iteration.

For many in Kroo Bay, there is no doubt of Kadiatu’s power. According to her neighbour Foday Dumbuya, a development agency worker, “she has helped so many people [in this community]”.

“She’s very good because she dreamt about the talent for healing people. So it is god-sent. She did not learn it from anybody [like most other healers do],” he explained.

As part of his role promoting public health with the international organisation BRAC, Dumbuya tries to convince parents to forego traditional medicine and self-medication and take their kids to the local health centre.

UNICEF statistics reveal that out of every 1,000 children born in Sierra Leone, a staggering 182 die before reaching the age of five – the highest child mortality rate in the world. Nonetheless, Dumbuya accepts that “there are some things that doctors cannot heal”.

He is not alone in this opinion.

“Understandings of illness in Sierra Leone are often not solely biomedical, but also connected to the spiritual realm,” said Denney.

“The Ebola experience has shown the importance of engaging with actors like traditional healers … so that they are playing a positive role in the wider health system and don’t become spoilers.”

Unless healers are asked to motivate and educate people to go to hospitals, she said, they will provide their services “underground in a manner that will make it harder to regulate”.