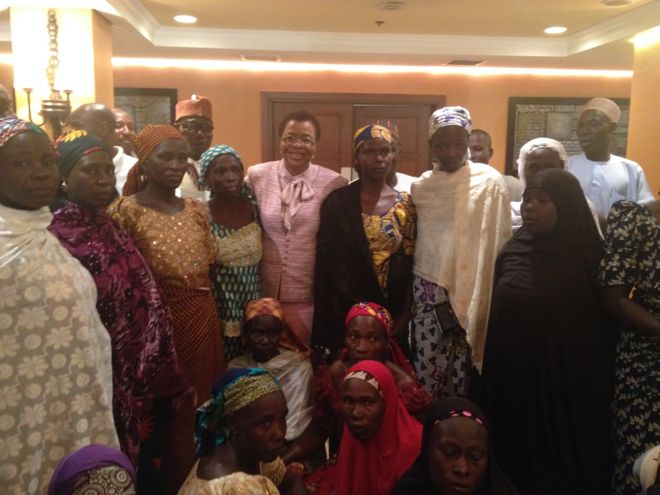 Graca Machel (centre, in glasses) is a prominent campaigner for the rights of women and children in Africa[/caption]

Mrs Machel who met some of the parents of the girls in Nigeria’s main city, Lagos, urged them to remain strong. Seventeen of the girls’ parents have died since their abduction, the BBC’s Umar Elleman reports from the city. The kidnap of the girls from a school in Chibok sparked global outrage. Mrs Machel, a prominent child rights campaigner, says she speaks about the girls wherever she goes. “I shook hands with all of you and feel what is in your blood… I share the pain with you of not knowing when the girls will come back.” She added that the parents have asked her to urge Nigerians and the international community to do more to free the missing girls. The meeting was organised by Murtala Muhammed Foundation to support the parents as they deal with the trauma caused by the abductions. The Nigerian army has rescued hundreds of hostages from Boko Haram, but none of the kidnapped schoolgirls have been found. President Muhammadu Buhari, who took office in May, has given the military a mid-November deadline to defeat the militants. With the support of neighbouring countries, Nigeria has recaptured most of the towns previously under Boko Haram control but the group still carries out frequent attacks, especially in Borno State, which includes Chibok. The Chibok schoolgirls have not been seen since last May when Boko Haram released a video of around 130 of them gathered together, reciting the Koran. Some of those who were kidnapped have since been forced to join the militant group, the BBC was told. Amnesty International estimates that at least 2,000 women and girls have been abducted by Boko Haram since the start of 2014. *BBC]]>