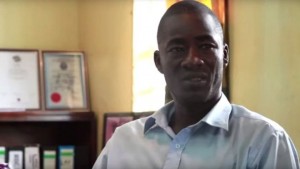 Prince Tommy Williams, who used to be a child soldier in Sierra Leone, was one of hundreds of volunteers who helped fight the spread of Ebola.

Last weekend, the country was declared free of the virus that killed almost 4,000 people in the country over the past 18 months. He told the BBC’s Richard Hamilton about his experiences in the civil war, which ended in 2002, and his Ebola work:   I had a normal family life before the war started in 1991. But at 15 I was kidnapped by the Revolutionary United Front (RUF) rebels and taken to the jungle where I was trained on how to use a gun and initiated into the group. I thought it was the end of my life. It was like living in a different world, not like living on earth. They used a blade to cut the letters RUF into my chest, so if I was thinking about escaping I knew that I could be killed if I got caught by militia who supported the government. The rebels also threatened to cut off my legs or arms if I tried to flee, and I saw this happen to other people. Sometimes they would even take out the heart from someone’s chest and cook it up with onions and ask people to eat it. It seems like a nightmare now.

I remember when we used to look for food and demanded that people hand it over. If they said: “We don’t have food”, we told them they were lying, and then we beat them even if they could have been telling the truth. [caption id="attachment_22283" align="alignright" width="300"] 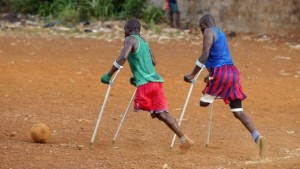 Amputation of civilians’ limbs was used by fighters on both sides of the conflict[/caption] Sometimes we were forced to kill, which we did under the influence of drugs: Marijuana was very easy to take – we used it like people drink coffee – and cocaine was also available. I was given the impression that if you took these drugs then you would be brave and if you were brave you would have the opportunity in the jungle to climb up the ranks. Luckily I did manage to escape from the jungle without being killed and I went to the capital, Freetown, but was unable to find my relatives.

I lived alone, but teamed up with some guys doing things like pick-pocketing and I was caught. Fortunately [while in jail] I met a preacher called Richard Cole, who was the founder of a project called Lifeline Nehemiah which aimed to give hope, and a home, to people like me who felt they had lost hope. He encouraged me saying: “You used to cause atrocities, but you can be used to contribute to rebuild the nation.” At the home he encouraged me to continue with my schooling, he also told me that guys like me would be leaders of the nation and help to rebuild it. Richard taught me that it was God who was taking me through all these troubling times, and I also learnt that it was important to give back what was invested in me. He passed away in 2006 but we had that vision and continue with it. When the Ebola crisis came to Sierra Leone in 2014 we considered it to be a common enemy. [caption id="attachment_22284" align="alignleft" width="300"] 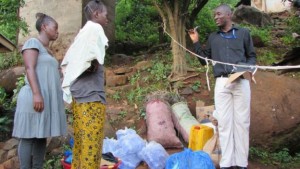 Prince helped distribute food to thousands who had been isolated because of Ebola[/caption] We were not medical practitioners but we had the passion to change things and we decided to develop our clinic to bring in suspected Ebola cases. Through this so many lives were saved. There were three key activities. We started with education as people found it difficult to accept that Ebola was real. So we started visiting communities and explaining that it was real and it was a death sentence. We educated more than 10,000 people, and explained the message in their languages – Temne, Krio and Limba. Secondly we started supporting people by giving them food and other items. This became a massive operation – visiting 11,000 people – and started giving fresh food in urban and rural areas. Thirdly we were able to team up with other agencies and put up an Ebola treatment unit that saved so many lives.

People were frightened. Sometimes when we visited people refused to accept us but as we kept coming back we became familiar to them. It was scary and some people said it was witchcraft, but we persuaded them that there were principles to observe to protect themselves. [caption id="attachment_22285" align="alignright" width="300"] 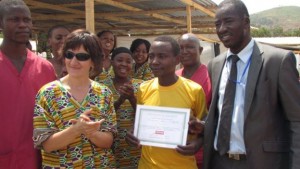 Prince Tommy Williams (right) hands over a certificate to person who has recovered from Ebola[/caption] One of the worst incidents I witnessed was when I saw a pregnant woman with suspected Ebola lying in front of us. There were three others in the house who were also suspected cases and no-one could come to their house because it was too dangerous. When I saw that woman lying there I felt very bad, I came out and talked with other volunteers and after that we started to set up an Ebola treatment clinic. We didn’t have any funds but we had a lot of help from local chiefs and the community, and that was how it started. Now I see my life as a changed person. I regret all that I did, but I am confident now that the future is great. We are investing in young people; I believe young people have a role in changing the world, not only Sierra Leone but the world. If we invest in them then we are building the future. *BBC]]>