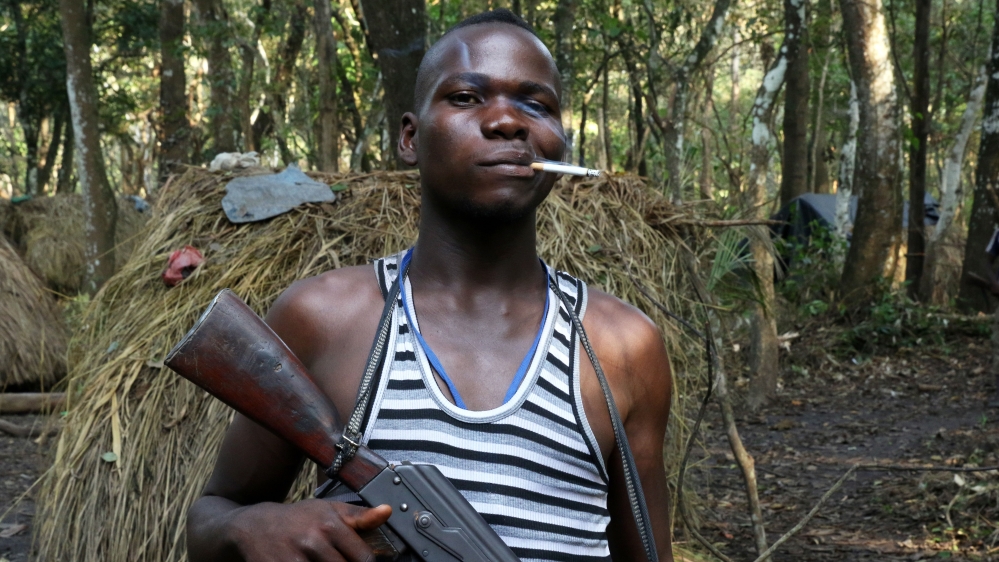 Yambio, South Sudan – On a long narrow path that cuts through a dense tropical forest, half a dozen youths clutching AK-47s man an improvised checkpoint, 30 minutes outside the city of Yambio.

Guarding the entrance to their training camp, these young men from the Zande tribe are members of the South Sudan National Liberation Movement, one of several recently formed armed groups in Western Equatoria state.

Until recently the state – inhabited by the Zande, Moru and other tribes – was an island of peace in conflict-ridden South Sudan.

But despite a peace deal signed in August to end an armed conflict of nearly two years between forces loyal to President Salva Kiir, an ethnic Dinka, and rebel leader Riek Machar, an ethnic Nuer, this part of the country has become less secure.

According to interviews with church leaders, government officials and eyewitnesses, more than 100 people, mostly civilians, are thought to have been killed in Western Equatoria since May.

In recent months, civilians in Western Equatoria have reported looting and arbitrary killings by soldiers of the national army, the SPLA. The government, in turn, has accused “unknown gunmen” of attacking barracks, killing soldiers and civilians, and looting supplies.

At the sound of gunfire, people scatter into the bush, leaving towns deserted for days or weeks. In response, thousands of young men have mobilised and left for training camps, demanding protection from random killings, and equal rights from what they call a Dinka-dominated government.

“I went to the bush because of killing of innocent people without reason, and without any action by the government,” said Victor Mwanga, commander of the South Sudan National Liberation Movement and a member of the Zande tribe, the largest ethnic group in Western Equatoria.

“We want justice and equal rights,” he told Al Jazeera, denying responsibility for killings and looting in Yambio, the state capital.

Mwanga, who used to be a first lieutenant in the SPLA before he defected, claims to be part of a loose network of groups that control thousands of armed youth in Western Equatoria. Many are “arrow boys”, a popular civil defence force that played a pivotal role in containing the Lord’s Resistance Army (LRA) in South Sudan.

The South Sudan National Liberation Movement, which has just entered into negotiations with the government, is just one of several armed groups of unconfirmed size and at times murky objectives that have mushroomed across Western Equatoria in recent months. Some have formed alliances with Machar’s opposition movement, the SPLM-IO, which has been trying to brand itself as a broad movement with appeal beyond ethnic Nuers.

The growing insecurity in the state comes at a sensitive point in South Sudan’s peace process. Positions in the transitional government will soon be filled based on a delicate power-sharing formula agreed on between Kiir and his rival Machar.

“These [armed youth] were promised [by Machar] that they would be given ranks,” said Patrick Raphael Zamoi, caretaker governor of Western Equatoria.

“But the security arrangement is signed and there will be no other militia absorbed. Either you are with us or are not with us. That is the choice we put to [the youth] very clearly,” said Zamoi.

The mobilisation of armed young men highlights the peace deal’s limitations in addressing the deeply rooted grievances of smaller ethnic groups. Although they have long clamoured for their rights, they say they will not be listened to unless they too take up arms.

Their demands focus on land, resource allocation and fair representation at the top levels of the government and army.

“[After independence], the Dinka come to power, and they are the one alone eating the national cake,” said commander Mwanga.

Tensions first arose earlier this year when ethnic Dinka cattle herders from the north moved large numbers of cattle to Western Equatoria, a fertile farmland. “We are farmers and farming with cattle doesn’t go together. They destroy our crop,” said William Warigo, a former member of parliament in Western Equatoria.

The cattle herders – often described as heavily armed and closely connected to the military – inevitably clashed with the local population and armed youth.

“When there is a crisis, the Dinka go to the military barracks, and some of them come back in uniforms,” explained Warigo, a member of the Moro ethnic group.

Several civilians as well as a government source alleged the cattle brought to Western Equatoria belonged to senior military and government officials based in Juba, South Sudan’s capital.

Although most of the cattle were taken out of Western Equatoria after President Kiir issued a decree in April ordering their removal, tensions between soldiers and the local population continued to rise until violence erupted in May.

In both May and September, eyewitnesses in Mundri reported indiscriminate shooting at civilians by SPLA soldiers, some of who are said to not follow regular command structures.

In response, the town’s population fled to the bush. “The mosquitos were biting us and we had no food,” said Gabriel, who did not want to give his real name fearing reprisals.

He spent 16 days with his family hiding in a hilly area near Mundri in September. They walked for six days before finally reaching safety in Yei. He now cares for the family of his brother, who was killed when army tanks shelled Mundri.

Mundri has witnessed the heaviest fighting in the state. Between 50 and 100 people may have been killed there, according to various unconfirmed estimates by local community leaders and members of the Catholic Church.

In Yambio county, at least 32 people – including three soldiers and at least one Dinka – have been killed since July in tit-for-tat attacks between soldiers and the local population, and as part of a general rise in lawlessness.

And in the town of Maridi, at least 14 civilians were killed in June alone, according to a fact-finding mission by the Catholic Church.

The government has yet to release a comprehensive report of casualties, but has denied attacking civilians.

“The soldiers are just staying in their barracks. In Yambio, it is the Zande who started targeting themselves. If you are pro-government, your house can be encircled, set on fire and everybody is killed – children, men and women,” SPLA spokesperson Phillip Aguer told Al Jazeera.

As part of the ongoing peace negotiations, the government has promised amnesty to youth who agree to lay down their arms. But many refuse to do so, demanding that Dinka elements of the army they hold responsible for killing civilians be replaced by local forces.

“The governor told people to come back, but how can you return to your house if the snake is still inside?” said 35-year-old Joseph Gizali Bivuru, who travelled from the town of Source Yubu to Yambio to join the South Sudan National Liberation Movement.

An arrow boy who fought the LRA to protect his community, Bivuru is determined yet again to take matters into his own hands.

“When I saw people being killed in Source Yubu, I got angry,” Bivuru said. “What kind of regime is this since they are killing their own citizens? If we sit back – we will all be killed.”