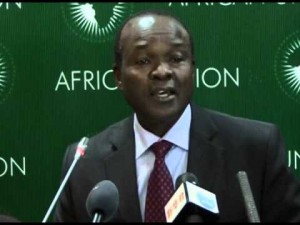 H.E Mr. Erastus Mwencha[/caption] The People’s Republic of China has donated 2 USD million to the African Union Commission to support the establishment of the African Center for Disease Control (ACDC). The grant documents were signed today 13th November 2015 at the African Union headquarters in Addis Ababa by the Deputy Chairperson of the African Union Commission, H.E Mr. Erastus Mwencha and the Vice Minister of Commerce, H.E Mr. Qian Keming who was leading a high level Chinese delegation. H.E Mr. Mwencha, on behalf of the AUC Chairperson, H.E Dr. Nkosazana Dlamini Zuma, expressed his gratitude to the People’s Republic of China for the financial support of the 2 USD million for the inception of the African CDC project and also for the donation of IT equipment to the Commission. Furthermore, the Deputy Chairperson acknowledged the strong and fruitful cooperation between Africa and china highlighting the impressive growing economic relations between China and Africa. “In 2012, the volume of trade was 198.5 USD billion and is estimated to reach 385 USD billion by end of 2015 if the current trends continue” He said. “These relations are mutually beneficial to both parties and are underscored by a sense of mutual respect. While Africa gains by the injection of technical and financial support, China also gains the access to Africa’s vast consumer market and to reserves of natural resources, which are needed to support China’s growing industrial sector.” He continued. The Deputy Chairperson also noted that since the establishment of the Forum on China-Africa Cooperation (FOCAC) in 2000, it has provided a valuable platform for Africa-China dialogue on key issues of development for both parties. He appreciated the ongoing partnership in various sectors including economic cooperation, trade, industrial investments, infrastructure and aviation, with transformational benefits over the last decade has made on bilateral basis with African countries. H.E Mr. Qian Keming, Vice Minister of Commerce of the People’s Republic of China expressed the readiness of his country to strengthen and broaden the areas of cooperation with Africa. The Vice Minister of Commerce highlighted that the Africa’s Agenda 2063 its First ten-year implementation Plan can be compared to China’s thirteenth five-year plan, which aims at boosting China’s long-term social and economic policies. He reiterated the commitment of China to fully supporting the African Union in the implementation process of Agenda 2063. He also said that the upcoming Forum on Africa-China Cooperation (FOCAC) that will take place is South Africa would be a critical step in demonstrating the will of the two partners to testify their excellent cooperation. H.E Mr. Qian Keming also said that H.E Xi Jin, President of the People’s Republic China would announce the Africa-China Cooperation for the next three years. He added that Plan would focus on development areas industrialization, infrastructure, and agriculture modernization. The discussions between the two delegations also included, among others, the regional aviation cooperation between China and Africa, the establishment of the Pan African Television and Radio and  the construction of the High Speed Train network. The 6th FOCAC will take place in December 2015 in Johannesburg, South Africa. In the margins of the Summit, the 5th Africa-China Entrepreneur Summit, the China Manufacturing Expo will be organized APO]]>