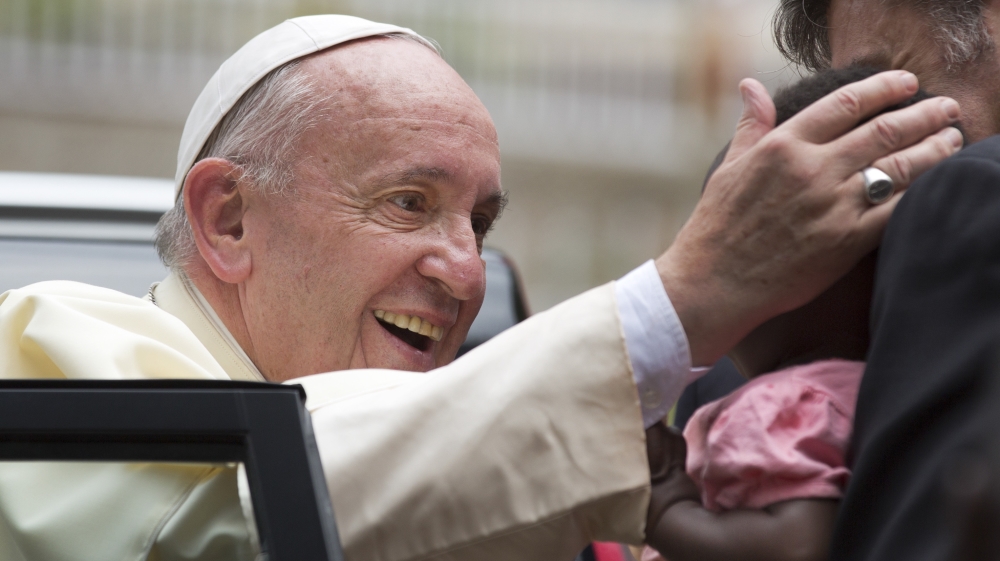 Thousands of enthusiastic Ugandans have greeted Pope Francis as he held a mass youth rally and honoured martyred Christians during the second leg of his historic three-nation trip to Africa.

The 78-year-old pope preached a message of love and peace on Saturday as he ditched his prepared remarks to address the rally for young people in the capital Kampala.

“Overcome difficulties, transform the negative into positive, and pray,” preached the pontiff, who was visibly moved after hearing the stories of Winnie Nansumba, a young Ugandan born with HIV, and Emmanuel Odokonyero, who was kidnapped and forced to be a child soldier.

Al Jazeera’s Malcolm Webb, reporting from the scene after the end of the speech, said the large crowd was “very excited” to see the pope.

“A lot of the people that we spoke to said what they were hoping for was blessings,” he said.

“People brought small children; they think it will help their small child [for the rest of their life] if they get to see the pope.

The Argentine pope began the day with a Mass before tens of thousands of people honouring the 45 Anglican and Catholic martyrs who were burned alive rather than renounce their faith during anti-Christian persecution in the late 19th century.

At the Namugongo shrine, the site of their execution just outside Kampala, Pope Francis urged today’s faithful to use the martyrs’ example to be missionaries at home by taking care of “the elderly, the poor, the widowed and the abandoned”.

The pope is expected to shift message to pressing geopolitical concerns when he arrives on Sunday in Bangui, the capital of the Central African Republic, where deadly violence between Christians and Muslims has flared recently despite the presence of a UN peacekeeping force.