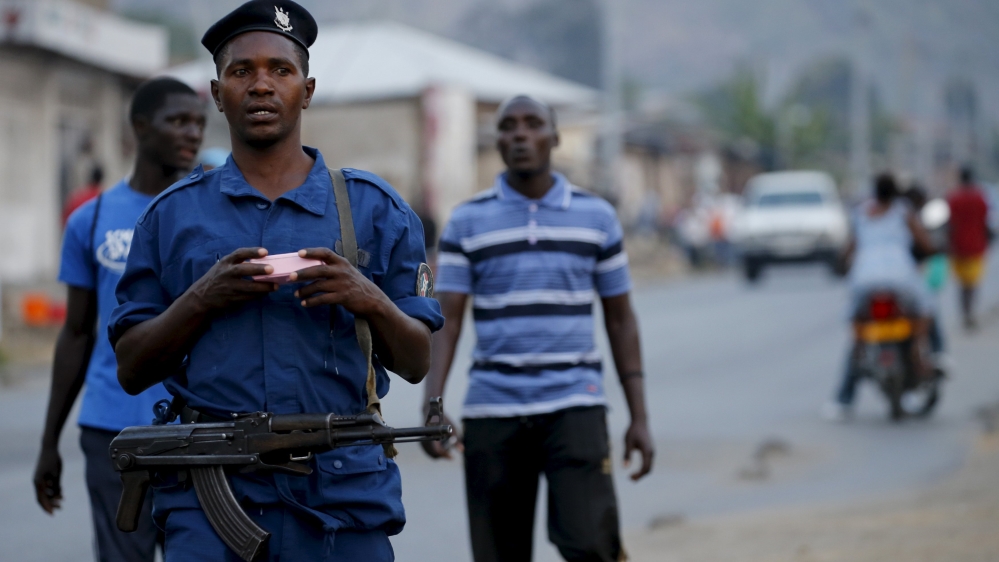 The international community has condemned Burundi’s government for inciting violence amid a deteriorating security situation in the country and expressed alarm at a number of apparent summary executions.

President Pierre Nkurunziza has announced a Saturday deadline for people to hand over illegal firearms or be treated as enemies of the state in a bid, the government says, to stem months of violence and protests over his election to a third term in office this year.

Critics have warned the move could “trigger widespread violence” if security forces start searching homes for weapons and opposition figures.

UN spokesman Stephane Dujarric said on Friday that Secretary-General Ban Ki-moon “is alarmed by the ongoing escalation of violence”.

“He expresses grave concern that in recent weeks, the discovery of the bodies of civilian victims, many apparently summarily executed, has become a regular occurrence in several neighbourhoods of Bujumbura,” Dujarric said.

“The recurring violence and killings in Burundi must stop. The secretary-general underlines the responsibility of the Burundian authorities to protect the civilian population, regardless of political affiliation, and ensure that the widespread impunity for these heinous acts is brought to an immediate end.

“The secretary-general also condemns public statements that appear aimed at inciting violence or hatred towards different groups in Burundian society.”

Ban’s statement came hours after the son of prominent Burundian human rights defender Pierre-Claver Mbonimpa was killed, reportedly after he was arrested by police in the capital Bujumbura.

International Criminal Court Prosecutor Fatou Bensouda said on Friday that anybody who incited acts of mass violence in Burundi was “liable to prosecution before the court” in The Hague.

“Should any conduct in Burundi amount to war crimes, no one should doubt my resolve … that the perpetrators do not go unpunished,” Bensouda said.

Nkurunziza’s ultimately successful re-election bid in July has helped plunge Burundi into crisis, a decade after it emerged from a civil war. Critics say his move violated the constitution, though he cited a legal ruling that allowed it.

Regional and world powers have grown increasingly concerned that the clashes and killings in Burundi may presage a repeat of the ethnic violence that culminated in the 1994 genocide in neighbouring Rwanda.