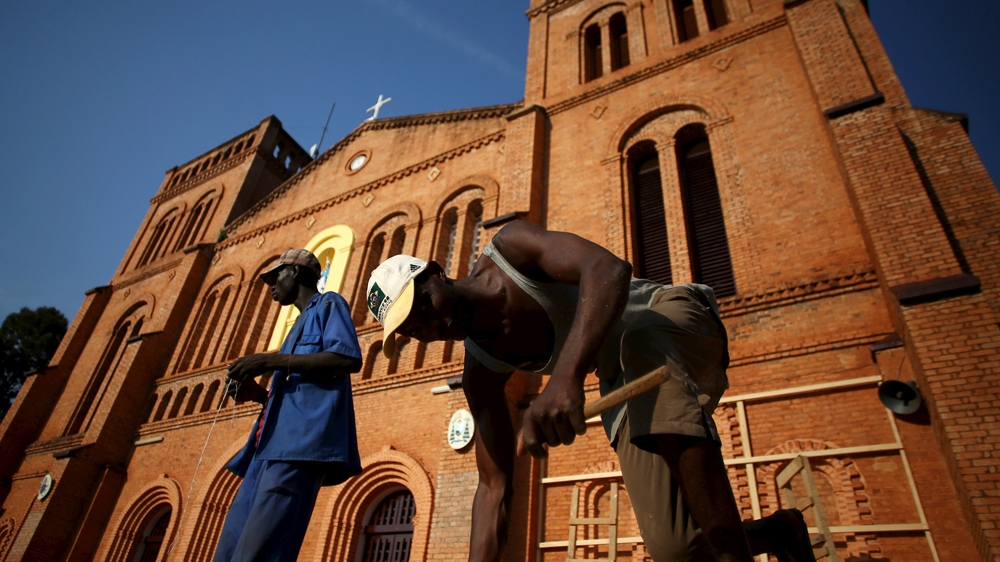 Bangui, Central African Republic – “Have the streets become larger, or has the government started cleaning them?” Theo is only half-joking as he lurches his yellow taxi from one side of the street to the other to avoid potholes and motorcycles. Part of the road from the airport to the city centre, and those roads around the cathedral and the Apostolic Nunciature, where the pope will be staying, have been freshly asphalted and gravelled – so freshly, in fact, that, mere days before the Pope’s visit, the work is still going on.

Along the route are banners welcoming the pope in French, Sango, Spanish and even Latin. Other signs read, “Minusca get out. Sangaris too,” in reference to the United Nations and French military missions in the country. In this highly religious society, where the UN and French forces are often perceived as ineffective, the tone is set.

The pope’s arrival on November 29 is the main topic of conversation in Bangui. Many consider it an occasion for the country’s armed groups to silence their guns – and for Central African Republic to return to the spotlight.

Since the ex-Seleka armed group deposed President Francois Bozize in March 2013, the country has been marred by fighting between rival factions that largely target the civilian population, and by the disintegration of the state apparatus. But the conflict here seems to have drifted off the radar for the rest of the world.

“Everything is ready … almost,” says Jesus Martial Demele, the communications officer for the church committee preparing for the pope’s two-day visit. Preparations have been an organisational headache, overseen by two commissions – one governmental, the other run by the church.

So many people are expected to attend the pope’s service in Bangui’s “Stadium of 2,000 seats” that two giant screens have been flown in by the Italian military, free of charge.

“We wanted to bring in six, but that was logistically impossible,” Demele explained.

Sound and filming equipment was brought in from France and Switzerland, as the national television channel has only three basic video cameras. A team from the Eurovision television contribution network travelled from Rome and Geneva to transmit live images on Television Centrafricaine (or TVCA).

But they are still struggling to overcome a glitch: “The national television is not equipped to receive the live stream, so we will have to find a way to fix that,” says Demele. The church also took it upon itself to build wooden barriers to keep people at bay and to protect the sites the pope will visit.

‘Praying for peace is not enough’

The pontiff has a busy schedule. As soon as he arrives in Bangui on the morning of the 29th, he is expected to head to the presidential palace to meet political, diplomatic and public figures. At midday, he will visit Saint-Sauveur, a camp for internally displaced people, before attending a meeting with bishops at the Nunciature, and then on to the Faculty of Evangelical Theology where he will be greeted by the Protestant community.

Only after this will come the moment most residents of the city are waiting for. In the evening, the pope will inaugurate the Jubilee Year of Mercy by declaring the cathedral’s entrance a “saint door”: throughout the year, people will be invited to pass through it and confess their sins – a symbol of a new beginning.

The official start of the jubilee is on December 8. This will be the first time that a pope has inaugurated one in advance, and outside the Vatican.

“It will be a strong, symbolic gesture,” the Archbishop of Bangui, Dieudonne Nzapalainga, told Al Jazeera. “By opening the door, he will ask us to do the same with our hearts. And, by doing so, to open ourselves to reconciliation. Mercy and unity are exactly what we need in this country.”

But while many hope the pope’s visit will be a beacon of peace, Nzapalainga is cautious. “The pope is not a magician,” he insisted. “Praying for peace is not enough. We need to take it upon ourselves to achieve peace and stability, or his words will have been useless.”

The Central African Republic is considered the most dangerous of the destinations on the pope’s African. The French ministry of foreign affairs has repeatedly warned him against going through with it. Since the inter-communal massacres that began in 2013, armed groups have been wreaking havoc in several provinces and in certain parts of the capital.

Before the pope’s visit, the French Sangaris force’s 900 troops – most of whom are in Bangui – and the UN’s Minusca mission of 12,000 men and women – 3,000 of whom are based in the capital – have been reinforced with 750 Egyptian soldiers, 140 Mauritanian policemen, and 300 Senegalese blue helmets from the UN rapid response force based in Cote d’Ivoire.

The Central African police is also mobilised, as well as 2,500 scouts. The UN flew in four staff from New York – which one observer described as “former military special force types” – and Romania sent in 12 members of its special forces. The pope will also be surrounded by 20 bodyguards from the Vatican’s special protection unit. Already, Minusca surveillance drones have reportedly been seen hovering over the capital for the first time since the UN mission was set up in 2014.

Bangui’s airport will also be closed during the visit.

The ex-Seleka coalition, the Popular Front for the Rebirth of Central Africa, released a statement calling on Central Africans – especially Muslims – to “come out in great numbers to demonstrate our hospitality, our gratitude and to show the pope that the problems we face in the Central African Republic are not confessional, but problems of bad governance”.

A Western security expert based in Bangui, who wished to remain anonymous, told Al Jazeera that religion is such a central aspect of Central African society that armed groups are unlikely to target the pope himself, as this would cost them a huge amount of popular support.

Most observers concur that the pope’s security is not the main concern.

The pope has insisted on visiting Point Kilometrique 5, one of Bangui’s most violent neighbourhoods, which is predominantly Muslim. For two years, Anti-Balaka armed groups and gangs have been surrounding the neighbourhood, effectively blockading it. Since the end of October, humanitarian access has been limited.

“PK5 is a hotspot, and you’d think that the pope’s security there would be reinforced. But that’s not the case,” explained General Jacques de Lapasse, the Minusca chief of staff. “It would be impractical for him to visit the mosque with a huge, bulky convoy, and so it will actually be reduced.”

After his meeting with the imam at PK5’s central mosque, the pope asked to visit the nearby stadium, where he will be greeted by well-wishers. “We’re talking about thousands of people. Both Christians and Muslims are so eager to see the pope that I believe security concerns will mainly have to do with managing the massive crowd,” said De Lapasse.

The real danger, according to observers, is for the general population. The expected arrival of tens of thousands of people from the country’s provinces and neighbouring states will heighten the risk.

“Most Banguissois own some kind of weapon, if only for self-defence,” said the security analyst, who spoke of unreliable makeshift guns and grenades that can be bought at the market for barely a dollar.

“If one of them, or even a policeman, shot in the air for some reason, or if a brawl were to unfold, things could get out of hand very quickly. And, though armed groups do seem intent on laying down their weapons for the pope, gangs always include wild cards. One spark, and all hell could break loose.”