Lagos (AFP) – A Nigerian medical doctor who contracted and recovered from Ebola has given birth in the United States, the hospital where she works in Lagos said on Tuesday. 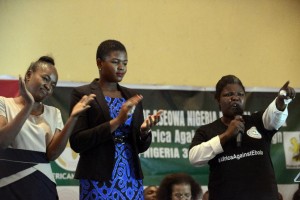 “First Consultants Medical Centre officially announces that resident staff and Ebola survivor Dr Ada Igonoh gave birth to a baby girl a few hours ago,” it said in a statement.

First Consultants hospital, a 40-bed private clinic in the bustling Obalende district of Lagos, was where Nigeria’s first case of Ebola was detected in July last year.

Igonoh helped to treat the patient, a Liberian finance ministry official, and certified him dead several days after he was first admitted. She fell ill the following week.

Microsoft founder and philanthropist Bill Gates published her lengthy account of the experience on his blog www.gatesnotes.com/Health/Surviving-Ebola-Dr-Ada-Igonoh.

First Consultants said Igonoh had been under medical supervision since becoming pregnant and that her daughter was certified Ebola-free at birth.

The birth was “a new lease of life and in memory of fallen colleagues and survivors of Ebola”, it added.

Across West Africa, more than 11,000 people have died from the disease since late 2013 — the deadliest outbreak since the virus was first identified in 1976.