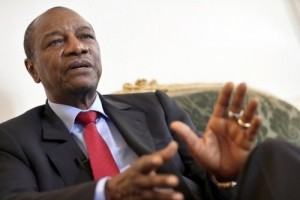 Alpha Conde was reelected for a second term in Guinea[/caption] The African Union Commission (AUC) Chairperson, Dr. Nkosazana Dlamini Zuma has welcomed the newly elected President of Tanzania, H.E. John Magafuli, who was sworn in on Thursday, 5 November 2015, following his victory at the general elections that took place on Sunday, 25 October 2015. The AUC Chairperson also congratulated Presidents Alassane Ouattara of Côte d’Ivoire and Alpha Condé of Guinea for their re-election in office in their respective countries. “I am greatly pleased to send this congratulatory message to President John Magafuli and the people of Tanzania. It was refreshing to witness the peaceful transition which took place in the country on the 25 October and it is my hope that this great nation will continue moving forward in this trajectory,” Dr Dlamini Zuma said. She has also congratulated outgoing President Jakaya Kikwete for his statesmanship, leadership and contribution to Tanzania and the African Union during his tenure of office. H.E. Robert Mugabe, President of Zimbabwe, and current Chairperson of the African Union and other Heads of State and Government attended the inauguration ceremony, to equally welcome the new President Magafuli in Tanzania. The AU Commission Chairperson also congratulated President Alassane Ouattara of Côte d’Ivoire and President Alpha Condé of Guinea for their re-election to the Presidency in their respective countries, stating: “I am also delighted to congratulate Presidents Alassane Ouattara and Alpha Condé of Côte d’Ivoire and Guinea as they begin their second and final terms in this high office”. Save for very few exceptions, elections in Africa in 2015 have gone very well, reflecting a very positive trajectory for the continent. The AU Commission Chairperson expressed her fervent hope that the remaining elections for this year and about twenty others planned for next year will be organised peacefully and in a democratic manner wherein the People of the continent fully exercise their sovereign right in determining their leaders. *AUC/APO]]>