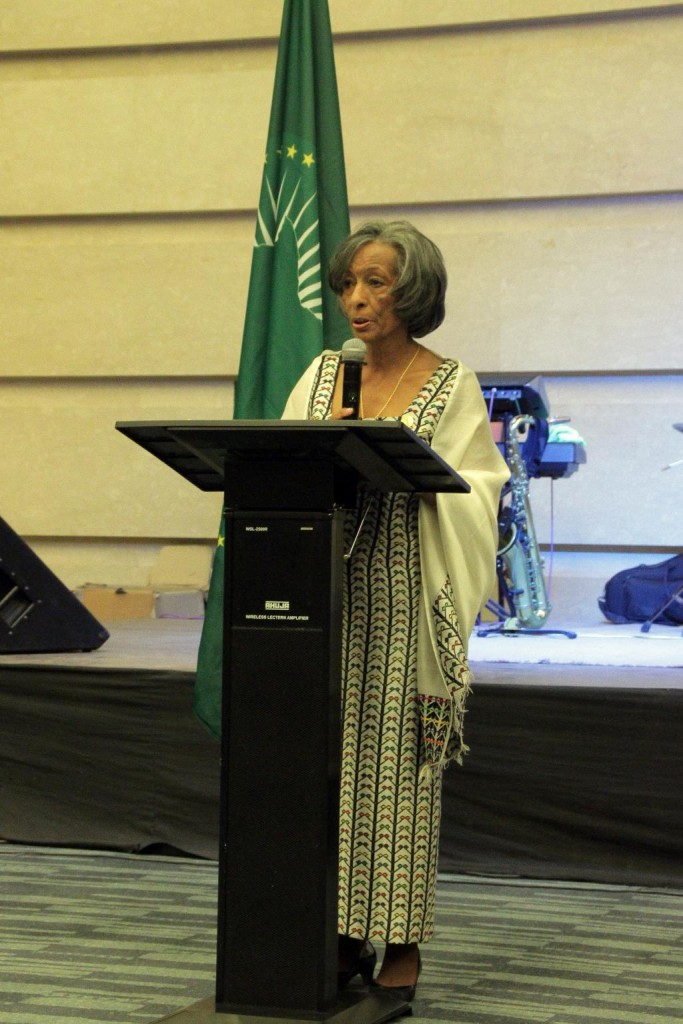 H.E. Ambassador Kongit Sinegiorgis[/caption] The African Union (AU) has honoured and celebrated the distinguished career of one of Africa’s longest serving women Diplomats, H.E. Ambassador Kongit Sinegiorgis of Ethiopia. Ambassador Kongit spent 52 years and 10 months in the Foreign Service of Ethiopia, during which she witnessed the historic creation of the Organisation of African Unity (OAU) on 25 May 1963, and its transformation into the African Union on 9 July 2002. The formal, but entertaining ceremony took place at the Headquarters of the AU on 16 November 2015, and was co-hosted by the Chairperson of the African Union Commission, H.E. Dr. Nkosazana Dlamini Zuma, and H.E. Mr. Mull Sebujja Katende, Ambassador, Permanent Representative of Uganda to the AU and Dean of the East African Region. In her speech to honour the veteran Diplomat, the AU Commission Chairperson described Ambassador Kongit as “one of the finest daughters of our continent. An African Diplomat par excellence, who loves her country and also loves her continent.”  She said that Amb. Kongit has not only fought hard for Ethiopia’s firm positions, but also for Africa’s interests. Speaking on behalf of the East African Group of Ambassadors, H.E. Mull Sebujja Katende, said Amb. Kongit’s passion over the years has never waned, describing her as a distinguished historic figure with a lot to share. This was a sentiment and a sense of admiration that were equally emphasized by all speakers, even describing her as a “walking encyclopaedia of OAU/AU.” “It is a great honour to pay tribute to you,” said the French Ambassador to Ethiopia, Amb. Brigitte Collet, noting the remarkable contribution of Amb. Kongit to Ethiopia and Africa. The tributes were furthermore echoed online by colleagues around the world. On his Twitter account, Zimbabwe’s Ambassador to Russia, Amb. Mike Nicholas Sango, described Amb. Kongit as “a remarkable patriot, diplomat and all-round human being. She sets a high bar for us all to aspire to.” H.E. Amb. Kongit was the former Permanent Representative of the Federal Democratic Republic of Ethiopia to the AU and the UN Economic Commission for Africa (ECA). Ethiopia’s Minister of Foreign Affairs, H.E. Tedros Adhanom, and Executive Secretary of the UNECA also paid tribute to the diplomacy legend. Dr. Carlos Lopes announced that Amb. Kongit would be associated to a $46 million project to transform into a museum the Africa House at UNECA, where the OAU was founded. Her Pan-Africanism will inform the museum project expected to be completed in 2018. 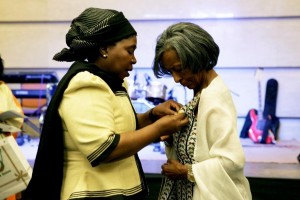 On her part, the guest of honour, Amb. Kongit, expressed her emotion-filled gratitude for the tributes paid to her while still alive. “I feel greatly honoured and deeply touched… There is no greater honour than serving one’s country to the fullest,” she remarked. She said that it was time to turn the page and have a good rest with her loving son. The ceremony brought together members of the Diplomatic community in Addis Ababa, the Ministry of Foreign Affairs of Ethiopia and the staff of the African Union. H.E. Amb. Kongit Sinegiorgis was born in Harar, Ethiopia, in 1940. She obtained a BA in International Relations from the London University College, and shortly thereafter joined the Ethiopian Ministry of Foreign Affairs, where she spent over 52 years and 10 months with different duties and responsibilities. *APO/AU]]>