International attention on the Paris attacks has resurrected a debate over the treatment of tragedies in Africa and how the continent’s leaders react to them. By Ariel Zirulnick* 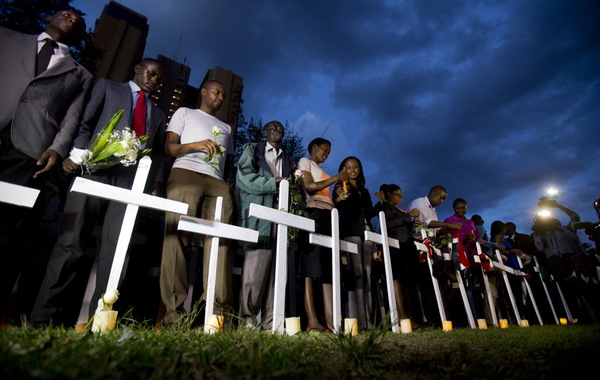 Kenyans light candles next to a white wooden cross for each of the victims of the Garissa attack, during a vigil at Uhuru Park in Nairobi, Kenya Tuesday, April 7, 2015. Students and other Kenyans gathered at dusk to honor and remember the victims, lighting candles, holding flowers, reading their names aloud, and erecting a white wooden cross for each of those who were killed in the Garissa University College attack.[/caption] In a strange twist, outrage over the level of attention the Paris attacks was receiving resurrected seven-month-old news of the Al Shabab attack on a university that killed 148 people in northeast Kenya. The story rose to such prominence that an April 3 article on the attack hit the BBC’s most-viewed list Sunday, prompting many readers to think another attack had happened (or that it had just happened, since they missed it the first time).

Most of that outrage, however, originated an ocean away from the beleaguered city of Garissa – according to the BBC, “half of the hits on the story came from North America, with another quarter from the UK.” It got 10 million page views – four times as many as it did at the time of the attack.

Here in Kenya and around Africa, the revived interest in a tragedy that occurred in April prompted mostly bewilderment and brought up long-standing grievances over the disparity of how terror attacks are covered.

But more frustration has been leveled at African leaders, including Kenyan President Uhuru Kenyatta, who scrambled to deliver condolences to France – a stark contrast to their leisurely, even muted reactions to horrors happening in their own backyard.

The last 12 months have included a frustrating string of such misses. When Al Shabab killed 28 people on a bus in northeast Kenya in November 2014, President Kenyatta remained in Abu Dhabi for a Formula One race. Less than two months later, six African leaders traveled to Paris after the attack on the staff of the satirical magazine Charlie Hebdo to join an international march for solidarity, with many more expressing their condolences from afar. But three months later, no Kenyan officials, or any of those from neighboring countries, attended the vigil held for Garissa victims in Nairobi a few days after the attack. The thousands killed by Boko Haram over the course of many months never got such a show of support either.

All of this reinforces the perception in Africa that leaders are far more concerned about international opinion than that of their own citizens. “It’s the same conversation we had when the Charlie Hebdo attack happened. You had 2,000 guys who were killed by Boko Haram in Nigeria and that was subsumed by the whole Charlie Hebdo thing. We had all our officials again quite quick to comment about that, quite quick to express condolences, but they said absolutely nothing about the Nigerians,” says Patrick Gathara, a prominent Kenyan commentator. “There is a sense in which they play to the international gallery and don’t really concentrate on issues that are much closer to home and affect us more directly.” This jarring disconnect likely stems at least partially from the fact that government officials here – many of whom come from their countries’ most elite families – are far more acquainted with the streets of glittering international capitals than the rutted streets of marginalized places like Garissa where national tragedies tend to unfold.

“That’s where they seek legitimacy. They don’t care too much about how Kenyans think about them,” Mr. Gathara says. “A small corner of the global elite do identify far closer to what’s happening internationally than what would happen in a place like Garissa, which is seen as really out of the way.”