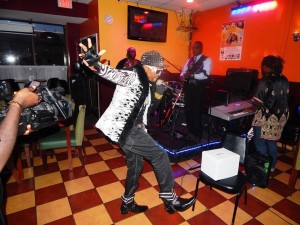 Docta Washiwara on scene at the Lisa T solidarity concert[/caption] The Cameroon Musicians Association of USA (CAMUSA), threw its support behind ailing Makossa star Lisa T with a solidarity concert on October 30th that raised $2,250:00. Based on the current exchange rate, the sum of  cfa 1,314,178  was wired to Liza T whose deteriorating health had become a cause for concern. Backed by a live band, Nelly Luv, Adèle Clarice, Annie Vadivas, Sister Comfort, B-1, Alexis, Amisa Assima, Ngando Black le Bukan, Paco, Tof Gone, Fifi Ribana, Aristide, Aloys, Yenikah, Kobo, Pregnon, and Docta Washiwara were amongst the musicians who took turns to thrill the public with scintillating music at the Maison Africaine Lounge. “CAMUSA thought it wise to express solidarity with an accomplished artist like Lisa T in her challenging moments,” said Docta Washiwara the President of the group.  Docta Washiwara described the evening as a success and in a bid to ensure transparency, the contributions were tallied in full view.   [caption id="attachment_22035" align="alignright" width="300"] 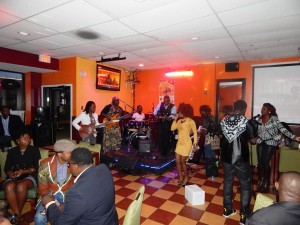 Talented singer Adele Clarice was part of the event.[/caption] Asked why CAMUSA was organizing such an evening even when Samuel Eto’o is said to have volunteered to foot the medical bills of Liza T, Docta Washiwara said beyond the medical bills, Liza T needs support with feeding, lodging and other sundry expenses to help her get back in shape. The CAMUSA President also announced that the group was working on a common a project to release an album as its contribution in the fight against Boko Haram. In a facebook post two days after the event, Washiwara confirmed that the amount collected was effectively wired to Lisa T. Supporting CAMUSA in the solidarity event were PJM Productions whose promoter Marechal Tiano was the MC, and the Maison Africaine Lounge .        ]]>