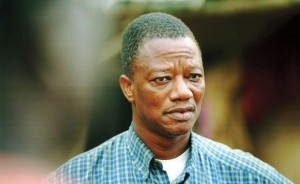 Photo: Daily Trust
Gregoire Ahongbonon from Benin named ‘African of the Year’ by Daily Trust for “extra-ordinary work in caring for under-privileged people with mental disabilities.”[/caption] African of the year award is an initiative of DAILY TRUST, Nigeria’s leading newspaper. The annual award is for Ordinary Africans who have distinguished themselves in their various walks of life and/or do charity projects in their immediate communities that are of positive impact to the people. Announcing the winner of the prestigious award in Accra, Ghana yesterday, the chair of the selection committee, former Tanzanian Prime Minister, Dr. Salim Ahmed Salim, described the awardee as an unsung African, who has committed himself to alleviating the suffering of the underprivileged in the society.

A national of the Republic of Benin, Gregoire Ahongbonon, who emerged as the winner of the 2015 Daily Trust African of the Year for his humanitarian work to the indigent in parts of Africa.

“After a thorough process of screening and discussion among committee members, we are pleased to announce that the 2015 African of the Year is Gregoire Ahongbonon, a national of the Republic of Benin, who is doing extra-ordinary work in caring for under-privileged people with mental disabilities,” Dr. Salim said.

Ahongbonon’s St. Camille Association mission, which is based in Cote d’Ivoire, offers care, support and help to the mentality ill and also assists in their reintegration into the society.

His extensive humanitarian work covers Cote d’Ivoire, Benin and Togo and is committed to “rescuing mentally ill people, some of whom have been put in chains by their families. He is the only recourse for hundreds of people with mental disabilities,” the chair of the selection committee said.

Ahongbonon, who was born in 1953 to a farming family in a remote village in Benin Republic and migrated to Côte d’Ivoire, will be presented in Abuja on January 13 and will receive the prize of USD 50,000 being given by United Bank for Africa, which has sponsored all past awards.

The Chairman/CEO of the Daily Trust Newspapers, Mr. Kabiru Yusuf, said the award was designed to recognize Africans, who were working tirelessly to ameliorate the problems of the underprivileged.

Yusuf said the cash award would help to promote the sustainability of his humanitarian work.