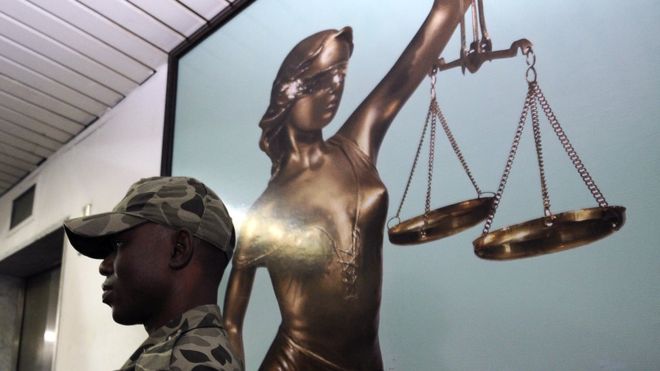 The call by South Africa’s governing party to withdraw from the International Criminal Court (ICC) has implications for the rest of the continent. But it is not going to happen any time soon.

When South Africa joined the ICC in 1998 the country had just emerged from the scourge of apartheid. South Africans were fresh victims of gross human rights violations and had hoped that the rest of the world would join the ICC. But some of the most powerful countries did not follow. And now the governing African National Congress (ANC) is calling for the country to leave the ICC – which would make it the first to do so.

The chairman of the ANC’s commission on international relations, Obed Bapela, said that the ICC had “lost direction”. This move away from the ICC comes not long after the South African government was criticised for allowing Sudan’s President Omar al-Bashir to leave the country despite an ICC arrest warrant for alleged war crimes in Darfur. Mr Bashir denies the allegations, saying they are politically motivated. Mr Bapela insisted South Africans were “very keen” to hear the stories of the victims of Darfur, as they had heard the victims of political crimes committed during the apartheid era at the Truth and Reconciliation Commission. “Human rights matter to us but we want a fair system,” he said. The ICC and global justice: What does the ICC do? But not everyone in South Africa supports Mr Bashir. Some South African government officials have referred to him before as “the Hitler of Africa”. South African troops have also been in Darfur as part of the UN-African Union peacekeeping force and have seen for themselves the destruction of Sudan’s western region. In 2009 and 2010, government officials openly stated that if the Sudanese leader landed in South Africa he would be arrested. So some may argue that the ANC’s move has little to do with South Africa’s support for President Bashir and more to do with the African Union (AU), which has repeatedly complained that the ICC treats Africans and Africa unfairly. And the ANC would prefer the AU to pull out of the ICC as a continental block. South Africa does not want to be isolated from the rest of Africa as it was under apartheid and more recently in the aftermath of the recent xenophobic attacks.

Whatever the reasons for the proposal, it must first be agreed on by parliament. Members of both the lower and the upper houses would have to vote individually on the motion, as the international obligations of the ICC have been incorporated into domestic legislation. With the ANC’s overwhelming majority in parliament, this is likely to pass, but then the president would then have to endorse the decision. It is worth noting that in Kenya, after parliament voted for the country to withdraw in 2013, President Uhuru Kenyatta – who was himself an indictee of the ICC at the time – did not endorse the withdrawal, which means that to this day the East African nation remains an ICC member. Nevertheless, the South African government is taking the idea seriously, with Minister for International Relations Maite Nkoana-Mashabane saying that the matter is on the agenda for the next meeting of ICC members at The Hague in November. Ottilia Maunganidze, a senior researcher at the Institute for Security Studies and a legal expert on international criminal law, says that if the rule of a law is followed to the letter, it would take South Africa at least a year to fully withdraw. Throughout this period, she told me, South Africa would remain a “state party to the Rome Statute”, the treaty that established the ICC. However, Mr Bapela said that South Africa’s “walk-out” would not mean that the ICC could not be reconstructed “once it collapses”. “It will be like the League of Nations which had to give rise to the United Nations,” he told me. The process could even lead to proper establishment of an African Court of Justice, which the AU has struggled to get off the ground, to try those accused of human rights violations in Africa, he said. *Source BBC]]>