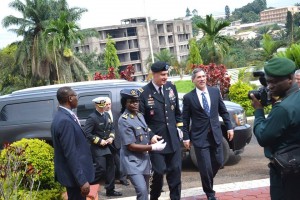 AFRICOM Commander General David M. Rodriguez and Ambassador Michael S. Hoza arrive at the Ministry of Defense on October 16, 2015.[/caption] YAOUNDE, Cameroon (AP) — The head of U.S. forces in Africa has donated armored vehicles to Cameroon to aid the country’s fight against Boko Haram, a military official said Saturday. The vehicles were formally handed over during Gen. David Rodriguez’s visit to the country on Friday, said Col. Jean Jacques Fouda, Cameroon’s official in charge of military hardware. Fouda said the vehicles could “fight against mines” and are some of the best the country has ever received. Though Fouda would not specify how many vehicles were donated, a Cameroon state media report said there were six in total and that they had previously been used in Afghanistan.

Rodriguez met with Cameroon President Paul Biya and Defense Minister Joseph Beti Assomo during his stay, the report said. The White House announced this week that 90 U.S. troops are headed to Cameroon, which has been regularly targeted by the Nigeria-based extremists and is contributing to a regional force to fight them. The Americans, the vanguard of a group that could ultimately number 300, will conduct airborne intelligence, surveillance and reconnaissance in the region. *AP/USA NEWS]]>