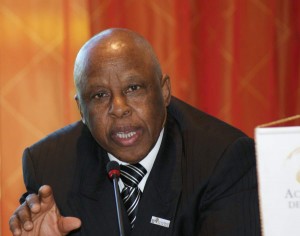 Festus Mogae[/caption] The Department of State commends the Inter-Governmental Authority on Development (IGAD) for selecting former Botswanan President Festus Mogae as the Chairperson of the Joint Monitoring and Evaluation Commission (JMEC) for South Sudan. A prominent leader of accomplishment and moral authority, President Mogae will lead a group of international experts responsible for overseeing and supporting the implementation of all aspects of the agreement. The United States welcomes his appointment and will work closely with him and other international partners to help the South Sudanese people revitalize their dream of achieving peace and building a new nation. The United States for decades has been one of the closest partners and friends to the people of South Sudan. The U.S. Special Envoy Donald Booth has been deeply involved in the peace process and will continue to work with all the partners, including President Mogae and the JMEC, in the implementation of the August peace agreement. Through successful implementation, we seek to restore the spirit of hope and promise shared by South Sudanese people upon independence in 2011. We look forward to receiving President Mogae in Washington, D.C. in the coming weeks to coordinate our efforts to accomplish this goal. *State Department Spokesperson John Kirby]]>