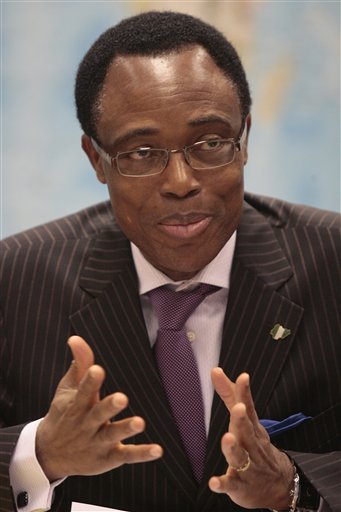 Martin Ihoeghian Uhomoibhi, president of the United Nations Human Rights Council, answers questions during a news conference at the Itamaraty Palace in Brasilia, Tuesday, April 28, 2009. Martin Ihoeghian Uhomoibhi is on four-day visit to Brazil. (AP Photo/Eraldo Peres)[/caption] United Nations Secretary-General Ban Ki-moon and African Union Commission Chairperson Nkosazana Dlamini Zuma announced today the appointment of Martin Ihoeghian Uhomoibhi of Nigeria as their Joint Special Representative for Darfur and Head of the African Union-United Nations Hybrid Operation in Darfur (UNAMID), with responsibilities including those of African Union-United Nations Joint Chief Mediator. He replaces Abiodun Oluremi Bashua of Nigeria, to whom the Secretary-General and the Chairperson wish to reiterate their deep appreciation for his dedicated service during his tenure as Acting Joint Special Representative/Joint Chief Mediator. Mr. Uhomoibhi brings to his new position extensive experience after a long and distinguished career in international forums. Most recently, he has served as the Founder and President of the Pan African Institute for Global Affairs and Strategy. During his over 30 years of service in the Nigerian Ministry of Foreign Affairs, Mr. Uhomobihi served as Permanent Secretary of the Ministry, Ambassador of Nigeria to Switzerland and Permanent Representative to the United Nations Office in Geneva. He also held positions in the Permanent Mission of Nigeria to the United Nations in New York, Consulate-General of Nigeria in Atlanta, Georgia, United States, and its Embassies in Ethiopia and Yugoslavia. From 2008 to 2009, Mr. Uhomoibhi served as the third President of the United Nations Human Rights Council and Chairman of the World Intellectual Property Organisation General Assembly. Mr. Uhomoibhi holds a doctorate degree in modern history and international relations from Oxford University, United Kingdom, a master’s degree in history and political science and a bachelor’s degree in political science from the University of Ibadan, Nigeria. Mr. Uhomoibhi was born Ewatto, Nigeria, in 1954. He is married with children. *AUC/APO]]>