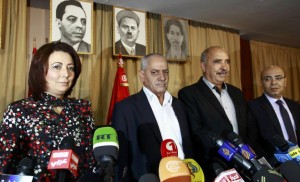 President of the Tunisian employers union Wided Bouchamaoui, Secretary General of the Tunisian General Labour Union, Houcine Abassi, President of the Tunisian Human Rights League Abdessattar ben Moussa and the president of the National Bar Association, Mohamed Fadhel Mahmoud (L-R), arrive for a news conference in Tunis, in this September 21, 2013 file photo. Tunisia’s National Dialogue Quartet won the Nobel Peace Prize on Friday for its contribution to building democracy after the Jasmine Revolution in 2011, the Nobel Committee announced on October 9, 2015. The National Dialogue Quartet is formed by four organizations of Tunisian civil society, the Tunisian General Labour Union, the Tunisian Confederation of Industry, Trade and Handicrafts, the Tunisian Human Rights League, and the Tunisian Order of Lawyers. REUTERS/Anis Mili/Files[/caption] OSLO, Norway (AP) — A Tunisian coalition of workers, employers, human rights activists and lawyers won the Nobel Peace Prize on Friday for pulling the country that sparked the Arab Spring back onto a path toward democracy and preventing it from descending into civil war.

The Norwegian Nobel Committee cited the Tunisian National Dialogue Quartet “for its decisive contribution to the building of a pluralistic democracy” in the North African country following its 2011 revolution.

“It established an alternative, peaceful political process at a time when the country was on the brink of civil war,” the committee said in its citation.

The prize is a huge victory for small Tunisia, whose young and still shaky democracy suffered two extremist attacks this year that killed 60 people and devastated the tourism industry.

Tunisian protesters sparked uprisings across the Arab world in 2011 that overthrew dictators and upset the status quo. But it is the only country in the region to painstakingly build a democracy, involving a range of political and social forces in dialogue to create a constitution, legislature and democratic institutions.

“More than anything, the prize is intended as an encouragement to the Tunisian people, who despite major challenges have laid the groundwork for a national fraternity which the committee hopes will serve as an example to be followed by other countries,” Nobel Peace Prize Committee Chairwoman Kaci Kullmann Five said.

The National Dialogue Quartet is made up of four key organizations in Tunisian civil society: the Tunisian General Labour Union; the Tunisian Confederation of Industry, Trade and Handicrafts; the Tunisian Human Rights League; and the Tunisian Order of Lawyers, which is the country’s bar association.

Kullmann Five said the 8 million Swedish kronor ($960,000) prize was for the quartet as a whole, not the four individual organizations. It wasn’t immediately clear who would accept the award on behalf of the quartet at the Dec. 10 award ceremony. The Nobel committee said the quartet played a key role as a mediator and force for democracy, paving the way for a peaceful dialogue among citizens, political parties and authorities across political and religious divides, countering the spread of violence.

It was formed after the July 2013 assassination of left-wing politician Mohammed Brahmi plunged the country into crisis with opposition parties boycotting the parliament. A national dialogue led by the quartet succeeded in negotiating a transition from the elected Islamist-led government to an interim government of technocrats tasked with organizing new elections for a permanent government.

The dialogue nearly broke down several times but ultimately succeeded and has been held up as a stark contrast to the coup in Egypt that removed the elected Islamist government there during the summer of 2013.

Nobel officials said they didn’t manage to speak to any representatives of the quartet before the announcement.

Houcine Abassi, the leader of the Tunisian General Labour Union, said he was “overwhelmed” as he found out about the award from an Associated Press reporter.

“It’s a prize that crowns more than two years of efforts deployed by the quartet when the country was in danger on all fronts,” he said. 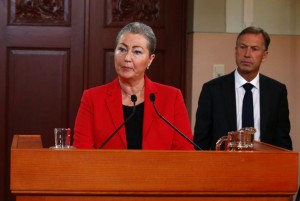 Abassi said he hopes the award will help “unite Tunisians to face the challenges presenting themselves now — first and foremost, the danger of terrorism.”

Mohammed Fadhel Mafoudh, head of the Tunisian Order of Lawyers, called the Nobel Peace Prize a message to all parties embroiled in political conflicts.

“To tell them that everything can be settled with dialogue and all can be settled in a climate of peace, and that the language of weapons leads us nowhere,” he said.

The decision came as a surprise to many, with speculation having focused on Europe’s migrant crisis or the Iran-U.S. nuclear deal in July.

“It is a very good prize that tries to get into the heart of the conflict in the Muslim world,” said Oeyvind Stenersen, a Nobel historian. “But it was a bit bewildering. It was very unexpected.”

French President Francois Hollande said he was “happy for all the Tunisians” and added the prize marks the success of the former French colony’s transition to democracy.

“That is an encouragement to support Tunisia even more through all the hard times it faces, as we’ve seen with terrorist acts in the last weeks and months,” Hollande told reporters in Paris.

The prize comes the day after unidentified assailants shot repeatedly at a lawmaker and prominent sports magnate in Sousse, underscoring a sense of uncertainty in the Tunisian city, which depends heavily on tourism.

While Tunisia has been much less violent than neighboring Libya or Syria, its transition to democracy has been marred by occasional violence, notably from Islamic extremists.

An attack in June on a beach resort in Sousse left 38 dead, mostly British tourists. Another in March killed 22 people, again mostly tourists, at the country’s leading museum, the Bardo in Tunis.

The uprising in Tunisia, provoked by high unemployment, corruption, dashed expectations and decades of repression by brutal security services, was set off on Dec. 17, 2010, when an itinerant fruit vendor set himself on fire in a remote southern city after he was manhandled by police.

The revolution electrified the Arab world, and in rapid succession pro-democracy demonstrations broke out across the region, ultimately bringing down the rulers of Egypt and Libya and plunging Syria into civil war.

The Nobel committee noted that in many of those countries the pro-democracy struggle has come to a standstill.

“But Tunisia has proven that it is possible, if you put aside your own first interests and think of the interests of the people and the nation,” Kullman Five told the AP. “We hope we will contribute to safeguarding democracy in Tunisia and those who seek to promote peace in the Middle East and North Africa.”

The award capped a week of Nobel Prize announcements, with the winners of the medicine, physics, chemistry and literature awards presented earlier in Stockholm.

The economics award — not an original Nobel Prize but created in 1968 — will be announced on Monday.