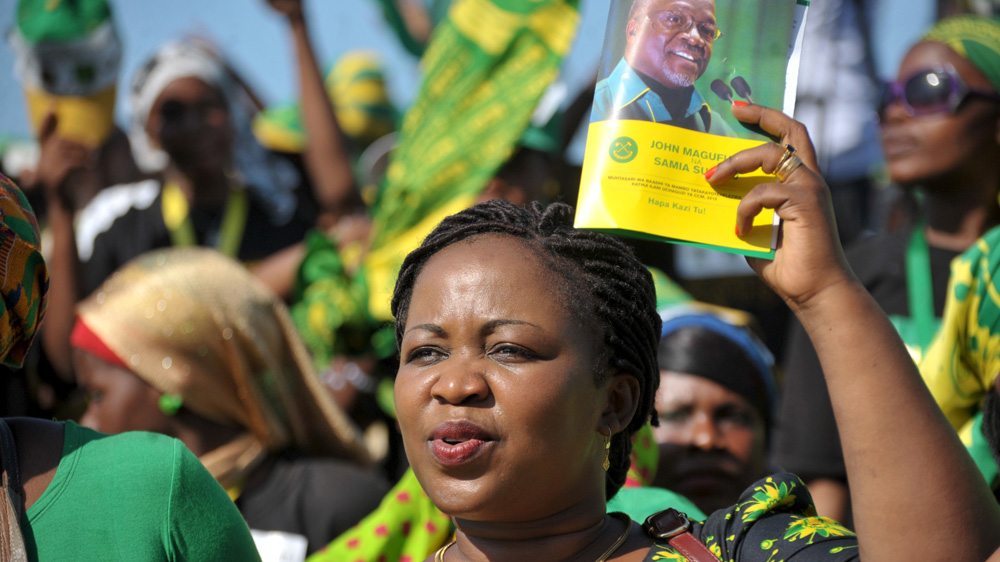 Dar es Salaam, Tanzania – The longest standing ruling party in Africa faces its toughest test yet on Sunday in the most hotly contested election race in Tanzania’s history.

With each party campaigning on similar platforms of change and progress, it is up to voters to determine whether to place their faith in an established politician of a young party, or a new face of the incumbent one that has governed Tanzania since multi-party democracy was introduced in 1992.

The excitement on the streets is palpable. When candidates come to town, cities shut down for heaving rallies. Everyone has an opinion. Everyone thinks the man they’re backing will win. Everyone is ready to celebrate. Some are prepared to riot.

When they hit the road, pikipiki drivers speed up so the banners of the opposition Chadema party they’ve proudly tied to the end of their motorcycles wave to maximum effect.

The bright green billboards of the ruling Chama Cha Mapinduzi (CCM) party that smother the country stand out starkly against the coffee-colored dusty ground on which they are planted.

Thanks to a new biometric registration programme, in the last six months the number of registered voters in Tanzania has more than doubled to 22.7 million.

The opposition Chadema party now led by career politician Edward Lowassa has over decades become a nimble and formative competitor to the vast political machinery of the ruling CCM party. Sixty percent of registered voters are below age 35, and Chadema’s appeal to young people is one of the reasons the election is so competitive this year.

However, Lowassa’s tainted past may hinder his party’s chances.

Lowassa stepped down as prime minister in 2008 over the “Richmond scandal,” in which he allegedly shepherded hundreds of thousands of dollars to the US-based Richmond Company, an umbrageous electricity supplier based in Texas that never supplied power when Tanzania was going through a series of rolling blackouts in 2006.

“Lowassa’s corrupt activities have been an open secret throughout Tanzania for many years,” reads a leaked 2008 cable from the US Embassy in Dar es Salaam that discussed Lowassa’s resignation.

Lowassa has denied the accusations, saying he stepped down for the good of the government.

“Lowassa says he always took the fall for system corruption, he never admitted to having direct involvement but he did the right thing for the country at the time,” said Adjoa Anyimadu, a research associate at Chatham House, an independent policy institute based in London.

Lowassa defected from CCM earlier this year after failing for a second time to gain the party’s nomination for president. The opposition has defended Lowassa’s history, saying he admitted wrongdoing and left CCM for Chadema because he wanted change.

“When they elected Lowassa, we knew the election would be easy for us,” CCM spokesman January Makamba told Al Jazeera.

However, Chadema campaign director Reginald Munisi disagreed and expressed confidence in a victory by his party.

“We are winning,” he said when he sat down with Al Jazeera in Dar es Salaam.

Munisi said CCM cannot overcome its decades of misrule, and the nation is ready for a new party that he advertises as being more market-driven and business friendly. “CCM doesn’t know how business works,” he said.

Emmanuel Tayari, a political analyst and CCM supporter, noted one of the opposition’s main platforms has been the promise of free university education. “Chadema says it is market-driven, but they are talking about free education,” he said.

The governing party has also become defined by its corrupt dealings. Lowassa’s “Richmond scandal” is just one of countless that CCM has faced down.

“Corruption has made the opposition more popular,” admitted Makamba.

John Magufuli, who has served as a minister of parliament since 1995, is leading CCM into the vote, and his reputation is as clean as his opponent’s is dirty. “Our selection of candidate gave our party a new brand,” said Makamba.

For both sides, the campaign has been largely about just that – branding. In an answer to a suggestion that he was too “unfit” to run for president, Magufuli did push-ups on a dusty campaign stage in front of cheering supporters in late September.

Ngila Mwase, a retired professor from the University of Dar es Salaam, said the candidates’ discussions on pressing issues have been too broad.

“I have a lot of reservations about how that is going,” said Mwase. “For example in infrastructure on roads. I expected them to suggest programmes based on feasibility studies, but their promises are more general. If you say you’re going to build a road from Point A to Point B, people can hold you accountable.”

Chadema has appealed to young, underemployed men. Women favour CCM at a ratio of three to one, according to internal party polls.

This dichotomy of demographics, the closeness of the race, and the sheer numbers registered to vote has lent a more rambunctious air to Tanzania’s normally halcyon politics.

In September, the National Election Commission called on police to investigate allegations that unnamed political parties were training youth militias to disrupt the election proceedings.

Both Chadema and CCM have security forces – the Red Brigade and the Green Guard, respectively – but say they are solely for the protection of high-profile party members.

RELATED: MPs warn of witchcraft ahead of elections

Votes must also be protected, says Chadema. With concerns about rigging, Lowassa has called on his supporters to remain at polling stations after they cast their ballots to “defend” them.

There will be 65,000 polling sites on election day, and agents from each of the eight parties are permitted to remain on site. The European Union Election Observation Mission has been deployed and will have two representatives in each region.

Tanzanian law mandates that citizens remain a minimum of 200 metres from the stations once they’ve voted. This year, however, the CCM government has called on Tanzanians to return home once they complete their civic duties.

“If people hang around polling stations, what is their intention if not causing chaos? They need to vote and go home to wait for the results,” said Damian Lubuva, chair of the election commission.