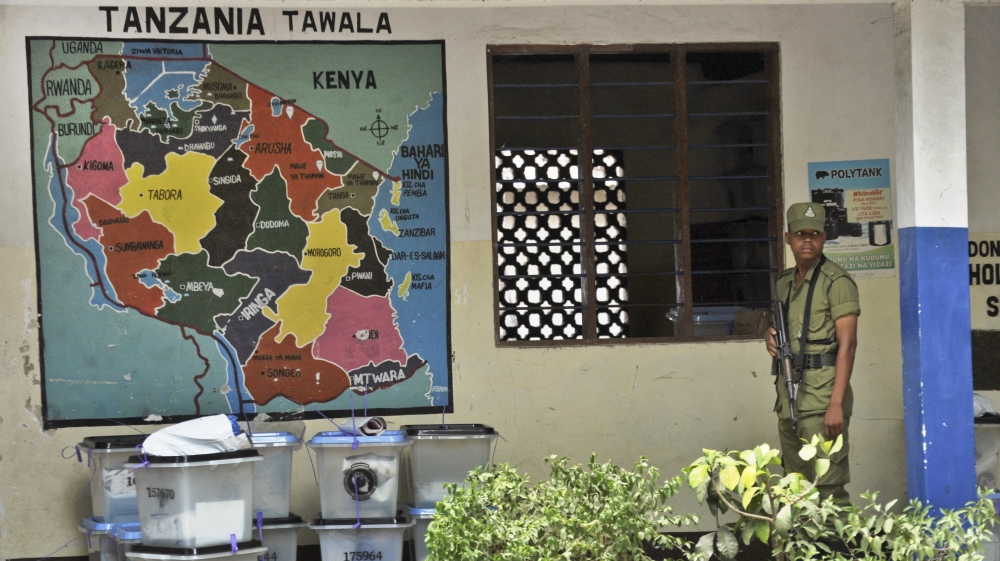 Tanzania’s elections have been thrown into doubt after the semi-autonomous Zanzibar archipelago annulled polls, sparking tension on the islands and raising questions about national presidential results.

Zanzibar’s electoral commission on Wednesday said elections on the Indian Ocean islands – where the 500,000 registered electorate had also voted on Sunday for Tanzania’s national president – must be carried out again, citing “violations of electoral law”.

“The process was not fair and had breaches of the law … I declare all the results to be null and void,” Zanzibar Electoral Commission (ZEC) chairman Jecha Salim Jecha said, reporting alleged violations including double-voting and cheating.

In response to the annulment, Maalim Seif, presidential candidate and leader of the main opposition party, the Civic United Front (CUF), accused the ZEC of acting unilaterally and without consultation at a brief meeting with senior party members.

Despite also citing electoral irregularities, such as dead names appearing on the voter’s roll, Seif, who is also currently Zanzibar’s second vice president in a unity government that rules the semi-autonomous islands, has urged the electoral commission to continue with tallying votes and announce the result.

“We still can solve the puzzle and the process must continue,” he told Al Jazeera.

“The chairperson of ZEC had three days to announce the outcome and if there were problems he should have approached us. The rules allow for an extra three days if problems arise, but ZEC did not do this.

“There is a moral responsibility to get back to the work of tallying votes and that is our plea.”

Nassor Mohammed, another CUF commissioner, told Al Jazeera that, if need be, the party was prepared to take legal action.

“We will take the necessary legal action because what was done was a very serious thing,” said Mohammed.

The annulment is likely to delay the announcement of full national results. Counting continued for a third day on Wednesday, with the ruling party presidential candidate in the lead.

With 133 of 264 constituencies having released results in East Africa’s most populous country, John Magufuli of the long-ruling Chama Cha Mapinduzi (CCM) had taken 56.51 percent of votes.

His nearest rival, Edward Lowassa of the opposition Chadema party, had 41.67 percent, according to official results announced by the National Election Commission (NEC) late on Tuesday.

But while the CCM is ahead in the presidential race, several key ministers have lost their seats.

Those ousted include the ministers for agriculture, information and investment, as well as the mayor of Dar es Salaam, the country’s economic hub.

Police in Zanzibar have in recent days fired tear gas to break up crowds, while foreign embassies warned visitors to the popular tourist destination to avoid large crowds.

Security forces on Tuesday surrounded the islands’ main tallying and results centre, after opposition challenger Seif Sharif Hamad of the CUF repeated warnings that he “will not concede defeat if robbed of my victory”.

For some of Zanzibar’s residents the annulment has created confusion and increased fears of violence.

Since Sunday’s vote, residents living in areas in the city centre have experienced nightly disturbances, which they claim are caused by the military and the government’s volunteer security units.

Ali Said Aziz, 29, an unemployed resident of Mwembetanga, an inner city neighbourhood, told Al Jazeera he feared the annulment could increase uncertainty over the political situation.

Aziz alleged he was beaten by men dressed in military uniform – suspected to be from the island’s volunteer organisation, the Revolutionary Government of Zanzibar (SMZ).

He said the polls’ cancellation might lead to more tensions in his area.

“Last night, I was taken from my house and the SMZ dragged me to the rubbish area on the corner where there were about 30 others standing under a shed, and men carrying machetes and sticks beat us.

“When they left us, I ran away and I went to sleep somewhere else, but now that the election has been cancelled, people are now confused.

“We don’t know what to do because we were hoping for a result, but now we must wait for a new election and that might mean more problems in our area,” he said.

Most businesses in the resort island’s city centre have been closed and the military has been on patrol since Monday when police fired tear gas at people demonstrating in support of Seif’s declaration that he had won the election, and proclaimed himself Zanzibar’s new president.

– With additional reporting from Tendai Marima in Zanzibar