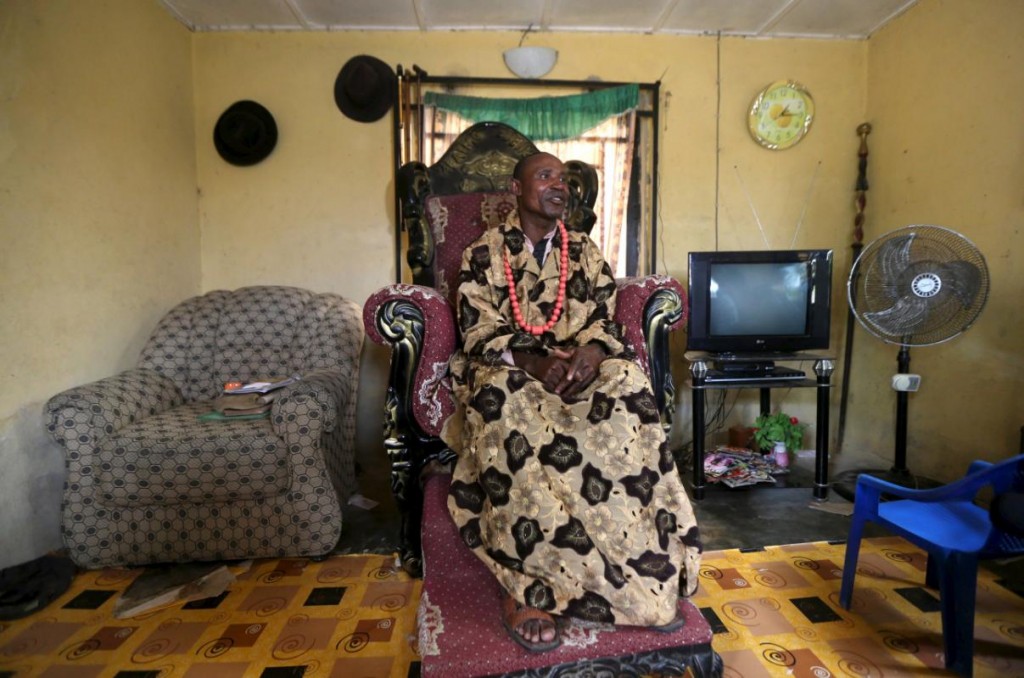 Deputy community chief of Yeneka village Douglas Oguta poses for a portrait in his home on the outskirts of the Bayelsa state capital, Yenagoa, in Nigeria’s delta region October 8, 2015. Tensions are building in the swampland of the Niger Delta as an amnesty that aimed to bring stability to Nigeria’s volatile southern region is due to expire at the end of the year. While the region’s towns and cities are mostly calm, local residents say kidnappings and armed robberies are on the increase in the mangrove swamps, where most oil wells are located. Former military ruler and Muslim northerner President Muhammadu Buhari said in his inauguration speech in May that he might “streamline” the amnesty, implemented in 2009 by his predecessor, Goodluck Jonathan, a Christian like most of the Delta population. The deal aimed to pacify militants fighting for a greater share of oil revenues in Africa’s biggest crude producer. At risk are payouts worth $300 million a year to 30,000 youths, money designed to discourage them from blowing up pipelines or kidnapping oil workers in a region where basic services are almost non-existent. REUTERS/Akintunde Akinleye TPX IMAGES OF THE DAYPICTURE 16 OF 24 FOR WIDER IMAGE STORY “TENSIONS IN THE NIGER DELTA”. SEARCH “DELTA TENSION” FOR ALL IMAGES.[/caption]

Tensions have been building in the southern swampland since Buhari said in his inauguration speech in May that he wanted to “streamline” an amnesty, that included stipend payments, agreed in 2009 with militants who were fighting for a greater share of oil revenues and hampering output in Africa’s biggest producer.

Buhari’s spokesman Femi Adesina told Reuters the president wanted to continue the amnesty “as long as necessary” though it was not a long-term answer to the region’s problems.

But as details remain unclear, uncertainty has fuelled speculation that when the amnesty’s original term ends in December, Buhari could halt or cut the benefits given to 30,000 youths and former militants aimed at discouraging them from blowing up pipelines or kidnapping oil workers.

Buhari’s comments also reinforced suspicions in some quarters that his home region, the mainly Muslim north, wants to exploit the Christian and relatively neglected south that generates 70 percent of state income.

“My people are suffering. We drink from the river where we also wash and defecate,” Ebi said, sitting in a bar next to a swimming pool in Yenagoa, capital of Bayelsa state, home to major oil fields. “If the government does not meet our demands we will take control of our resources. We will manage our own oil,” Ebi said, prompting nods from other ex-militant leaders who, like him, call themselves “general”.

The amnesty for the Christian militants, who wanted a greater share of oil revenues and to end what they call the region’s historic marginalisation, was implemented by Buhari’s predecessor, Goodluck Jonathan, a Delta Christian.

The Delta’s town and cities have been quiet but in the mangrove swamps where most oil wells are located, kidnappings and armed robberies have recently gone up, according to Delta residents. Gunmen attacked a Shell oilfield on Friday and it had to shut a major pipeline in August to stop oil theft. “Sea piracy and armed robberies are on the rise,” said environmental activist Alagoa Morris. “I am an indigenous person but I am afraid to go to the creeks. They rape, kill and maim.”

Under the amnesty, worth an estimated $300 million annually, thousands of men have received job training but those who have finished courses have struggled to land jobs in an oil industry that mainly hires highly skilled workers. 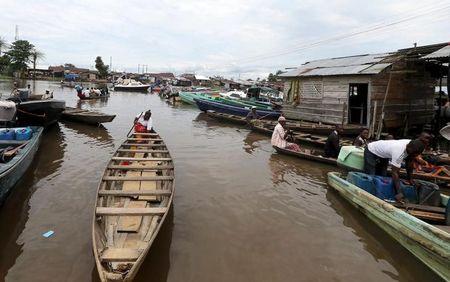 People ride in canoes and speedboats at Swali jetty near the banks of the Nun River on the outskirts of the Bayelsa state capital, Yenagoa, in Nigeria’s delta region October 8, 2015. REUTERS/Akintunde Akinleye[/caption] Instead, the main benefits have been lucrative contracts to secure pipelines, and a monthly 65,000 naira ($330) cash handout that has allowed them to leave the mosquito-infested creeks and settle in cities such as Yenagoa or Port Harcourt. Many have started families, and fear losing their main source of income. “I have three kids. I pay 35,000 naira for each of them for the kindergarten per term,” said Samuel Epitari, another general sitting at a table packed with beer bottles. In the heyday of the “oil business”, Epitari added, he made 500,000 naira a month, and would not hesitate to take up arms again if Buhari turns off the money taps. “We will go back to our struggle,” he said, adding that some groups had started recruiting again.

In the March election, Delta voters backed Jonathan, their local “son”, and largely kept their cool when he conceded. But handouts to the youths and former militants have not been paid for three months, according to “Ex-General Pastor” Reuben Wilson who warned in a statement of “catastrophic consequences” should the amnesty end. The region gets an extra 13 percent from state revenues but corruption has stunted development in the Delta relative to the rest of Nigeria. A new airport and new hospital never materialised in Yenagoa, where street vendors sell fried snails next to garbage piles. Life in the creeks, where basic services are almost non-existent, are even tougher.

In Yenaka, just a few miles outside Yenagoa by boat – there is no tarmac road or bridge – villagers and crew have to raise their hands as they pass a maritime checkpoint because police are so wary of getting ambushed.

On the jetty, women wash their hair in the river as there is no running water while young men doze on plastic chairs, trying to escape the heat inside their single-storey buildings.

Yenaka is home to the family of Diezani Alison-Madueke, Jonathan’s oil minister who is now being investigated by anti-corruption police in Britain.

She has denied any wrongdoing but villagers see her as typifying an elite that has failed to drag Africa’s most populous nation out of poverty.

“Right from the time she was elected she has not done anything for our community,” said Oguta Douglas, the deputy community leader, sitting on a traditional throne in his modest house. “There is nothing here, you can see for yourself. No water, no light, no road.”

The oil firms have tried to win over villages by bringing roads and water but community leaders say the projects are too little and poorly conceived – for instance setting up diesel generators that residents cannot afford to run.

“The oil companies are only interested in scooping out the oil and leave the impact to us,” said Obunagha community elder Tari Dadiowei. “If the amnesty ends I don’t know what will happen.”