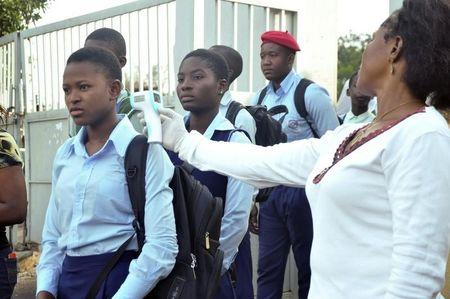 ABUJA (Reuters) – Ten people have been quarantined after coming into contact with a patient with Ebola-like symptoms in the southern Nigerian city of Calabar, officials said on Thursday, a year after the country was declared free of the deadly disease.

A patient came to the University of Calabar Teaching Hospital on Wednesday with symptoms consistent with the viral hemorrhagic fever, staff there said.

Local media reported the patient had since died, though there was no official confirmation.

“We have sent blood samples for testing and quarantined identified contacts,” the hospital’s chief medical director, Queeneth Kalu, said. Nigeria’s National Emergency Management Agency said 10 people were in quarantine. Any confirmed case would cause major concern across the region, where experts had hoped they were finally emerging from the worst epidemic of the disease on record. The three West African countries at the heart of the epidemic – Guinea, Liberia and Sierra Leone – had just recorded their first week with no new cases since the outbreak was declared in March 2014, the World Health Organization (WHO) said on Wednesday.