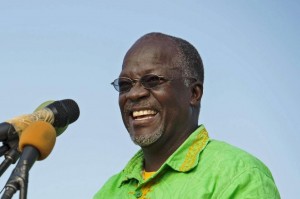 The elections, held on Sunday, were the hardest fought electoral race in the east African nation’s history, with the opposition providing the first credible challenge to the CCM since the introduction of multi-party democracy in 1995.

But while the CCM will celebrate Magufuli’s win, it came at the cost of several veteran CCM ministers and politicians, ousted from their parliamentary seats. Magufuli won 58 percent of votes — a total of 8.9 million — compared to his closest rival Edward Lowassa, a former prime minister and CCM stalwart turned opposition chief who won 40 percent. Magufuli’s running mate Samia Suluhu Hassan, will become the first female vice president of Tanzania. The opposition rejected the result, claiming victory itself, while the Zanzibar archipelago annulled polls over irregularities.

Minister of works in the last government — for which he earned the nickname “The Bulldozer” — Magufuli was not initially seen as a frontrunner, but won the CCM nomination from a field of nearly 40 other candidates.

He succeeds President Jakaya Kikwete, who stepped down from power having served his constitutional two-term limit.

In a bid to show his strength and refute allegations he was not physically fit for the top job, during his campaign trail he performed push-ups to cheering crowds.

Running on an anti-corruption platform, Magufuli tried hard to cultivate an image of humility, and in rallies repeatedly asked supporters to let him work for them.

“Please allow me to be your servant, give me this great chance to serve you,” he said, a message repeated in multiple campaign rallies.

He has also stressed the ordinariness of his upbringing. 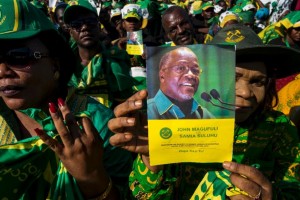 A supporter holds a booklet with a photo of presidential candidate John Magufuli at a rally by ruling party Chama Cha Mapinduzi (CCM) in Dar es Salaam, Tanzania on October 23, 2015 (AFP Photo/Daniel Hayduk)[/caption]

“Our home was grass thatched and like many boys I was assigned to herd cattle, as well as selling milk and fish to support my family,” he told one of his final campaign rallies.

“I know what it means to be poor. I will strive to help improve people’s welfare.” Magufuli, who comes from Tanzania’s northwestern Chato district, on the shores of Lake Victoria, was awarded a doctorate in chemistry from the University of Dar es Salaam. He spent some time studying at Britain’s University of Salford. A member of parliament since 1995 and a devout Roman Catholic, he has also taught in a secondary school and as an industrial chemist. He has held various cabinet portfolios, including livestock, fisheries and land.

Many opposition supporters said they had had enough of CCM’s decades-long dominance over Tanzanian politics, but supporters point out that the loser Lowassa did not represent much of a break with the past.

Lowassa, a long-time CCM loyalist before defecting, resigned as prime minster in 2008 over corruption allegations that he denied. Magufuli’s supporters say he offers hope for a different type of politician in Tanzania.

“He was for many years minister for works, supervising execution of mega projects worth trillions of shillings, but was never implicated in any corruption scandal,” ex-prime minster and veteran CCM politician Joseph Warioba said of Magufuli.

“He could have been the richest politician in the country.”