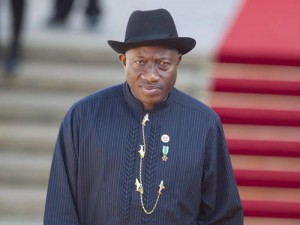 Victory in losing: former Nigerian President Goodluck Jonathan has a place in history for the magnanimity in which he conceded the last elections in Nigeria[/caption] Reports indicate that Jonathan is walking into the warm embrace of many Tanzanians who are upbeat and confident that his presence would bring credibility to the polls which analysts consider the toughest and closest elections in the country’s history. The ruling Chama Cha Mapinduzi (CCM) party which has been in power since the country’s return to multiparty democracy in 1992 is up against a united opposition that has increasingly been making significant electoral gains. As Tanzanians prepare to vote on either side, they are happy that high profile observers including President Jonathan, who they consider as ‘a hero of free and fair elections in Africa’, would be on ground to monitor the elections. They are hoping that their presence would ensure a free and fair process. Paying tribute to Jonathan in a recent editorial ahead of the elections, The Daily News of Tanzania commended the former President for taking his defeat in the last Presidential elections “in all magnanimity”, adding that “Jonathan may very well have averted bloodshed that is characteristic of incumbent leaders who cling to power tooth and nail, fang and claw! What lesson is there in this for us in Tanzania, pray?” In an editorial entitled ‘Salutary lessons for Tanzania from Nigeria’s latest elections; the paper said further: “It is generally admitted that the election in Nigeria was unprecedentedly free, fair and transparent, whereby the opposition candidate, Mohammadu Buhari, won the Presidency by a tolerably comfortable voter majority of 53.96%. What is more remarkable is that the incumbent president who sought re-election, Goodluck Ebele Jonathan, garnered only 44.96% of the votes and most graciously accepted the results promptly!“Oh, I don’t know beyond the fact that Tanzania could tragically do worse if it fails to dedicatedly take a leaf out of Nigeria’s newest Book on Elections!” [caption id="attachment_21623" align="alignright" width="300"] 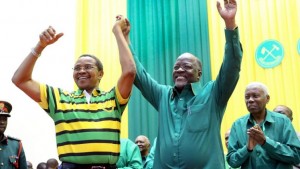 Tanzania’s public works minister John Pombe Magufuli, right, celebrates with president Jakaya Kikwete, left, after the ruling party announced its presidential candidate, in Dodoma, Tanzania, Sunday, July 12, 2015. Tanzania’s ruling party, which has been in power for five decades, has chosen public works minister John Pombe Magufuli as its presidential candidate, making him the favorite to replace current president Jakaya Kikwete in the upcoming October election. (AP Photo/Khalfan Said) (The Associated Press)[/caption] Similarly, the Guardian of Tanzania also poured encomiums on former President Jonathan describing him as a democrat who has pointed the way forward for the rest of Africa. In its own editorial comment entitled ‘High profile figures among observers will add credibility to poll process, results’, The Guardian wrote: “Jonathan’s voluntary handover of power to the opposition wrote a new chapter for Nigeria’s democracy, given the fact that it is rare for sitting presidents in Africa to hand over powers to winning opposition parties.” Reports also indicate that the people of Tanzania are happy to see Jonathan lead the Commonwealth election monitoring team because of his exemplary feat of conceding defeat even before the end of the electoral process and subsequently handing over power to the opposition party. While in Tanzania Jonathan is billed to meet with President Jakaya Kikwete , other heads of delegations as well as the local and international media. It would be recalled that President Mohammed Buhari profusely praised Jonathan for being magnanimous enough to initiate a telephone conversation where he conceded defeat even before the final votes were tallied, thus saving the nation from the predicted Armageddon. While receiving the handover notes from the former President, Buhari said: “What I will say is since the telephone call you made you have changed the course of Nigeria’s political history. For that you have earned yourself a place in our history, for stabilizing this system of multi-party democracy system and you have earned the respect of not only Nigerians but world leaders. [caption id="attachment_21628" align="alignleft" width="300"] 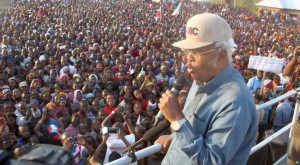 Edward Lowassa, presidential candidate of Tanzania’s opposition party CHADEMA — a coalition of four opposition political parties[/caption] “All the leaders that spoke to me and congratulated us for arriving at the point we arrived, mentioned this and I could understand, a lot of relief in their voices that Nigeria has made it after all  and this is largely owed to a situation. “If you (Jonathan) had attempted to make things difficult, you could have made things difficult and that would have been at the expense of lives of poor Nigerians, but you choose the part of honor and may God help all of us. Thank you very much your excellency.”  ]]>