DAR ES SALAAM, Tanzania (AP) — Wildlife activists are applauding the arrest by Tanzanian authorities of a Chinese woman for alleged ivory smuggling but caution that it’s a small step toward stemming the “slaughter of industrial proportions” of elephants 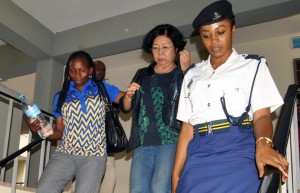 In this photo taken on Wednesday Oct. 7, 2015, Chinese national Young Feng Glan , center, is escorted by police from Kisutu Resident’s Magistrate Court in Dar es Salaam, Tanzania. A Chinese woman has been charged in a Tanzanian court with smuggling nearly 1.9 tons of ivory as wildlife activists applauded the move by Tanzanian authorities to crack down on the illegal ivory trade, which has devastated the elephant population in just a few years. Businesswoman Yang Feng Clan, 66, was charged Wednesday in Dar es Salaam alongside two Tanzanian men. The three suspects allegedly committed the crime between Jan. 1, 2000 and May 22, 2014. Their case was adjourned to Monday. (AP photo)[/caption]

Yang Feng Clan, 66, was charged Wednesday in Dar es Salaam alongside two Tanzanians with smuggling 1.9 tons of ivory between Jan. 1, 2000 and May 22, 2014. Their case was adjourned to Monday.

“We are very happy to hear about this arrest since Tanzania has been facing a major catastrophe with the death of 30 elephants per day for several years now,” Paula Kahumbu, a top wildlife conservationist, said Friday

Tanzania has been largely in denial about the crisis, and anyone reporting on it has been threatened, she said. Kahumbu says she is cautiously optimistic that “Tanzania is turning a corner on poaching.”

“We have heard that the Tanzanian authorities have been cracking down on poachers and that over 1,400 people arrested, and over 300 jailed in the last 12 months. If this is true, then Tanzania is to be congratulated,” she said.

Others are not so optimistic and fear this arrest is to gain attention and support ahead of elections later this month, she said.

In Beijing, Chinese Foreign Ministry spokeswoman Hua Chunying said Friday she did not know about the case but asserted that China is committed to protecting endangered wildlife.

Elephant Action League said in a statement Thursday: “Tanzania has been the ground zero of elephant poaching in East Africa for the past several years.”

“A slaughter of industrial proportion such as this cannot have happened without the involvement of high-profile, corrupt individuals and government officials at the two ports of Dar es Salaam and Zanzibar, and elsewhere in civil society,” it said.

The group said a specialized wildlife trafficking unit under Tanzania’s National and Transnational Serious Crimes Investigation Unit made the arrests.

In February, China imposed a one-year ban on ivory imports amid criticism that its citizens’ desire for ivory threatens African elephants.