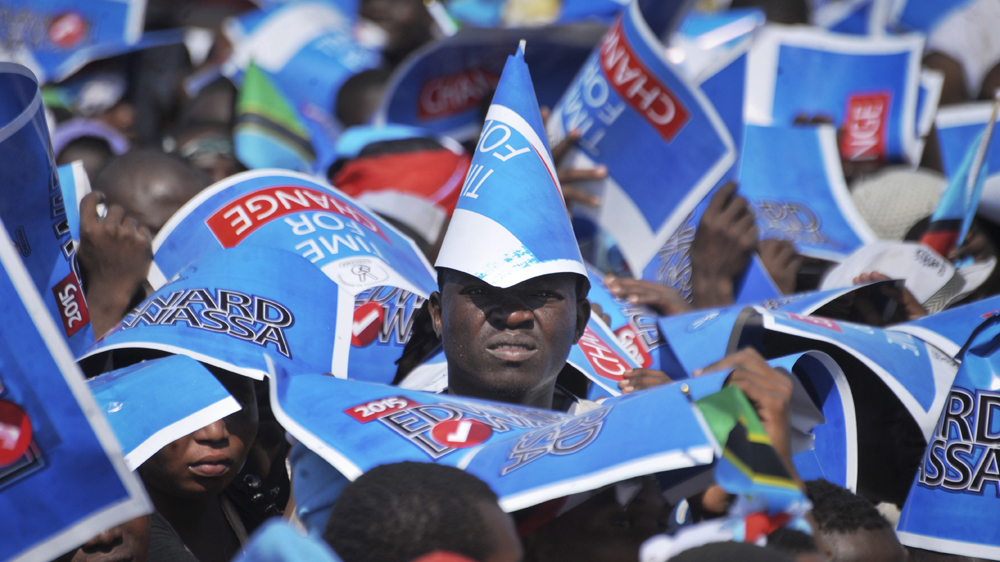 Mwanza, Tanzania – Tanzanians vote on Sunday in a general election that has the opposition posing the greatest threat in decades to the long-ruling Chama Cha Mapinduzi (CCM) party.

More than 22 million voters, about half the total population, have registered across the country – double the number from just six months ago thanks to a biometric voter-registration system.

Many voters are concerned about a lingering poverty rate of 65.6 percent, as Tanzania has struggled to reduce extreme hunger and malnutrition rates. Improved health services, education, and employment have been common themes in campaigning.

Al Jazeera spoke with some Tanzanians about their views of the election.

“I hope the person who wins on October 25 will prioritise health services, especially for pregnant women and children who are five-years old and younger. They are the ones who are hurting and need more.

“In the economic sectors, the president should focus on farmers because there are many in Tanzania but they don’t have the equipment they need to run their farms well.

“The government can help them with collective group loans. Those can have more impact than individual loans. Some farmers have small vegetable gardens for themselves and their families to eat, but a loan would help them grow enough to sell and make money.”

“Personally I don’t like that because we need to treat people as people. We don’t use young people for personal gain. No, we need to value them, honour them, agree to help them, support them. All they need is someone who can lift them up. But our politicians don’t do that.

“Change is a big, difficult term for someone who has never been to school.

“But they just think change is a good term. But do they [Chadema] really understand it? Will that really meet their goal? Chadema is not using the youth wisely at the moment. Ask them, do they have any projects … for the youth?”

“CCM prints T-shirts and gives other gifts like kanga [fabric] to women. I tell the women not to be taken in by these things.

“Most women are business women – they sell some cooked food and work in the markets, but their income is not enough so I am helping them to understand they need changes.

“Education is the most important thing in this election for me.

“The second is to change the leadership system because we have been under CCM for about 50 years and we need good leaders who will bring development to our nation.

“My need is change in leadership and a change from the past. We need people’s power which is Chadema.”

“The issue of poverty is a general problem, but the main agenda if you publish my views is youth employment.

“A good number of Tanzanian youth are not well employed or they have jobs that cannot sustain them. This affects their family and keeps them from progressing.

“The next government should put much emphasis on employment to raise the economy of the country at the national and individual level. We have a lot of graduates here in Tanzania, but we don’t have employment. We don’t have opportunities.

“We should not only look for quantity – having large numbers of graduates – but for quality. They need to be able to perform well with areas of specialisation. I hope the IT sector can employ a lot of people.”

“We have all the resources to make the country rich, and right now we have gas. But if you go and check the government has already made the contract with China, they have signed to give all the gas to that country.

“It’s not as it was expected.”

“My biggest problem has been this: it has been an election with very little content. People are talking about personalities. No one is talking about content.

“What change do they [the politicians] stand for? What specifics are they bringing to the table?

“It’s convenient for parties that they don’t need to focus on content. I think it’s been a relief for the incumbent party to not have to go into details.

“I want to see empowered citizens. One of the ways to empower people is to give them information and make them recognise their rights. At this point citizens have outsourced their rights to politicians and political parties.

“The Tanzania I would like to see is where the average citizen understands their rights to make change. This will not come, and it will never come from, a politician.

“For me it’s not a matter which political party is in power as long as the person in charge is ready to give back that power to citizens.”

The post Tanzania election: The view from the street appeared first on African Media Agency.