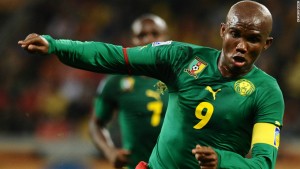 He’s one of world football’s best-known names — and now Samuel Eto’o is using that fame to draw attention to the ongoing crisis that “everyone stops talking about.”

The former Barcelona and Chelsea star has set up theYellow Whistleblower FC foundation to raise funds and awareness to help people fleeing Nigeria and Cameroon amid a rising tide of attacks from Boko Haram militants.

Earlier this month, Oxfam revealed that more than 1.5 million people have fled their homes in Nigeria alone, while Cameroon — to which many have escaped — is an increasing target for cross-border terror attacks.

Former Cameroon captain Eto’o, who retired from international football last year, told CNN it was time the world stepped up its response to an ongoing catastrophe.

The 34-year-old urged leaders and the media to react as they did to the terror attack on the Charlie Hebdo magazine offices in Paris in January.

“It is important for us to talk about it — if we don’t do it, who will?” said the four-time African player of the year.

“We all tried to offer our support (after Charlie Hebdo). We saw African head of states coming to Paris to offer their support to France.

“When it comes to Charlie Hebdo, we talk about it. The media were right: It was important to talk about that. However when it comes to Boko Haram, we need to wait for the most horrific things to happen for the media to say a word.

“After that, everybody stops talking about it. It is like nothing ever happened.

“I think journalists should have denounced this situation. We saw what happened in France. We were very sad about this. We were asking ourselves, ‘How can this happen? How can they succeed? How can these people take away lives of happy people who had families and friends?’

The soccer star’s foundation has already raised more than $75,000 to help displaced victims of Boko Haram terrorism, and Eto’o said he believed Africans in a position to do so must “raise their voices to denounce these horrors and raise awareness.” 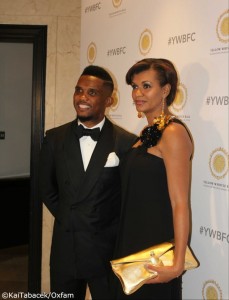 Eto’o and wife at a recent Oxfam charity event[/caption]

“I was affected, like many of my African brothers, by Boko Haram. We haven’t been affected by such horrors in a very long time,” he said. “We are seeing these atrocities and we seem powerless.

“We need to cope with this situation. We need to denounce it and find solutions at our level while our armed forces do their own job on the ground.”

Eto’o said one of the most effective ways to defeat Boko Haram and its ideology would be through education, which he called “the most formidable weapon.”

“We need to create schools and give the possibility to these children to learn and understand,” explained Eto’o, whose illustrious career has taken him to Italy, Spain, Russia, England and Turkey, winning three European Champions League titles. He was reportedly one of the the world’s highest-paid players at Anzhi Makhachkala.

“Some of these children affected by the situation are young and are easily manipulable, and they are manipulated. These children are used and join this terrorist organization.”

Last month, an attack by Boko Haram militants on a market and an infirmary in northern Cameroon killed around 30 people and injured 145, according to a military official.

The attack provided another demonstration of the Islamist group’s reach in Africa.

Col. Didier Badjeck, a spokesman for Cameroon’s military, said the attackers “came in from across the hills in Nigeria” to launch the attacks in the town of Kerawa.

Eto’o, who now plays for Turkish club Antalyaspor, said: “We wanted to show the right way to our young brothers, but the ignorance that we have in Africa leads to our own brothers shooting at us.

“When you are African, and you are sometimes better (at something) than Europeans or Americans, you’re not considered African.

“It’s frustrating but you can’t be mad. I refuse to be ignorant. The only message that I want to give is that I want people to have easy access to education.”

Eto’o also believes that increased education and awareness will pave the way for other footballers to emulate the international success he and other African football stars have enjoyed overseas.

“I really hope there will be another Samuel Eto’o, another Yaya Toure and others who are part of history,” he added, referring to Manchester City’s Ivory Coast midfielder. “In order to be part of history, you need to have an impact several times.

“When you impact several times, that means you are out of the ordinary. That’s why in Africa we need to say no to ignorance while accepting and understanding our values. When we get to do that, it will be a big step forward.

“I am not getting into politics, but it is important for Africans to dream and to write their own history. They need to be responsible for their own destiny.”