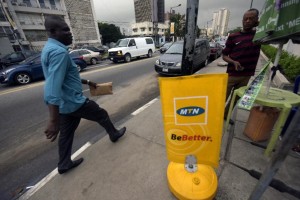 A man walks past a MTN notice board in Lagos, on October 27, 2015 (AFP Photo/Pius Utomi Ekpei)[/caption] Johannesburg (AFP) – The Johannesburg Stock Exchange launched Friday an investigation into mobile giant MTN for “possible insider trading” before the South African company announced it had been hit by a $5.2 billion fine in Nigeria.

News of the fine broke Monday morning in Nigeria, sparking a sell-off of MTN shares before the company formally notified shareholders later in the day.

“The market regulation team is looking into trades that took place before the announcement in order to determine if there is any evidence of possible insider trading,” Peter Redman, Johannesburg Stock Exchange (JSE) market regulation advisor, said in a statement.

South African law dictates that companies are to immediately warn shareholders about price-sensitive information. “The investigation will follow due process to establish whether there have been any breaches of the listings requirements and can be lengthy process,” said Andre Visser, JSE regulation manager. MTN issued a statement saying “senior management of the company and its advisors are currently engaging with the JSE Limited on the timing of the… announcement.” The probe could result in South Africa’s bourse operator slapping MTN with another hefty fine or result in criminal charges. “It just puts the company under additional pressure,” said Amy Cameron, telecoms analyst at BMI Research, a market research firm based in London. “It will be another really big challenge.” Cameron said that MTN should brace itself for a rocky few months. “It could look into some sort of international arbitration, because a 5.2 billion dollar fine is absolutely crippling,” she said. Early in August the NCC issued a directive to mobile telecoms companies operating in Nigeria to deactivate all unregistered SIM cards within seven days or face sanctions.

The penalty saw the company’s shares crash on the JSE and raised questions about the renewal of its licence in Nigeria next year if the fine goes unpaid.

The NCC has set a November 16 deadline for MTN to pay the fine.

MTN had more than 62.8 million subscribers in Nigeria — its biggest market — in the second quarter of this year.