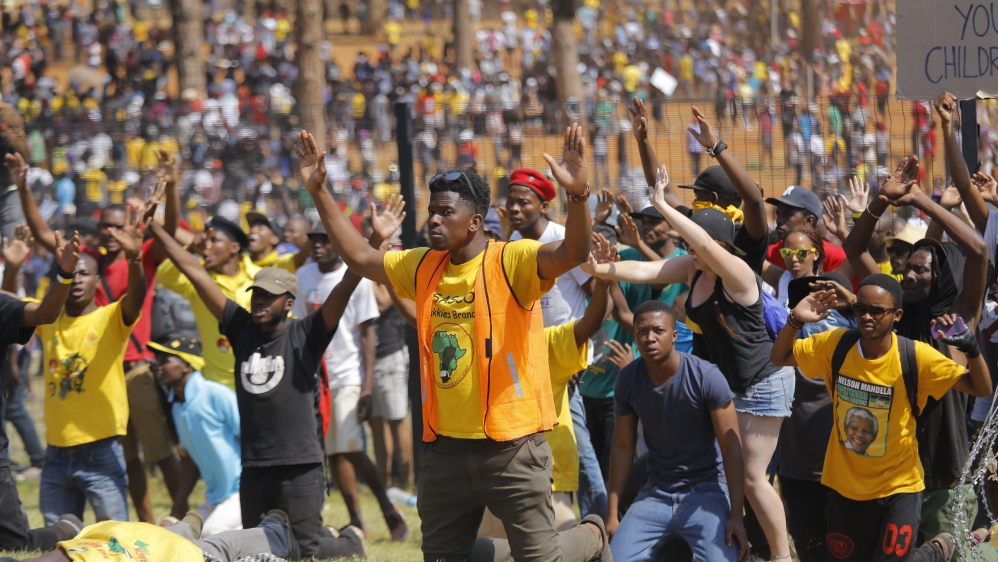 Johannesburg, South Africa – It has already proven to be a hollow victory.

For the thousands of students who gathered outside President Jacob Zuma’s Pretoria offices on Friday, there was no spontaneous outburst of celebration.

There was hardly even an announcement of victory. It was to the media that Zuma announced that the demand for an embargo on fee increases for the 2016 academic year would be heeded.

By that time the crowd had already thinned. Police had fired stun grenades and pepper spray against sections of protesters that had forced its way through barricades. And even though the majority of the crowd called for a peaceful protest, thousands were forced to disperse in the ensuing chaos.

Yet for those who remained, there was no singular moment of euphoria that could be captured for posterity.

The South African Police Services shot tear gas and rubber bullets into the crowd shortly after the announcement, leaving many questioning the motivation behind the police tactics.

But the scenes outside the Union Building, and earlier in the week of protesters clashing with police outside parliament in Cape Town, may now detract from the gritty determination, and indeed desperation, that saw the protest flourish from the University of Witwatersrand in Johannesburg, to a nationwide shutdown of higher education institutions.

Luvuyo Nondabula, a 25-year-old, student from Queensburgh in Kwazulu-Natal says he cannot even afford registration fees . “The desperation that comes with being a student is unimaginable,” he said.

And his sentiments were echoed by students elsewhere, who saw protest as the means to stem the annual escalation in fees at higher education institutes.

At Senate House, the administration building at Wits University that protesting students have renamed “Solomon House” for struggle hero Solomon Mahlangu , the meetings led by the student leadership each night sought to take direction from assembled students.

As students at Wits readied themselves for a protracted protest, the expanding protest forced Higher Education Minister Dr Blade Nzimande to issue a six percent cap on all fee increases for the coming academic year.

University administrators seemed to think it was a healthy compromise. Students disagreed.

Shaeera Kalla, the president of the Wits Students Representative Council said the students had three demands: An end to outsourcing of labour on university campuses, an end to the discrimination of workers on university campuses and a zero percent increase in fees in the following year as a step towards achieving free education.

By the time Zuma announced the suspension of fee increases, the ANC had joined the demonstration in Pretoria on Friday and also celebrated “the victory of the disciplined and gallant campaign” of the student protest in a statement reacting to the president’s moratorium on fee increases.

Political analyst Ebrahim Fakir says this points to one of the absurdities of the ANC.

The party, he points out, is ultimately responsible for the policy decisions informing fee increases at universities, but it has then also joined in protests against these increases, and then celebrated a victory against it.

“We’ve seen this before when the ANC marched against tariff increases from power utility Eskom,” he said.

These contradictions Fakir says, points to the fluidity of the ANC identity.

“This allows them to act as political party with all the trappings of a party, decision making, congress and parliamentary but at the same time it’s also a social movement, a popular front and it appeals to different types of identities depending on the way it is operating,” he said.

Ahmed Kathrada, a close friend of the late Nelson Mandela and an ANC stalwart, who visited Solomon House on Thursday, and then joined the demonstration outside the Union Buildings on Friday, said he was impressed by the discipline of the students.

“I was inspired by their spirit of victory,” he said.

The moment to capture the sight and sound of the students’ victory has certainly passed. But their victory, hollowed already as it is, may prove to be short-lived if it does not capture the greater sentiments of the protest.

“Education is the most important tool to addressing inequality, and should be accessible and affordable,” Kathrada, the veteran ANC leader said.

“One hopes that the government takes notice of the students’ demands.”