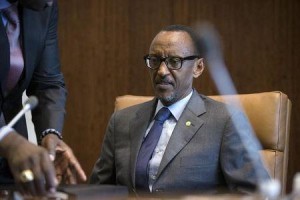 KIGALI (Reuters) – Rwanda’s lower house of parliament voted on Thursday to allow President Paul Kagame to extend his rule beyond a second term that ends in 2017 and possibly stay on until 2034, a move opposed by the United States and other aid donors.

Draft amendments to the constitution approved by the lower house still have to be backed by the upper house and also put to a referendum, but are not expected to stumble at either stage.

After debates on Wednesday and Thursday, lawmakers agreed that presidential terms be cut to five years from seven with a limit of two terms, but an exception has been made for Kagame.

Parliament, dominated by Kagame’s allies and supporters, debated the issue after a petition calling for changes was signed by 3.7 million supporters of the rebel-turned-president who is credited with rebuilding Rwanda after the 1994 genocide.

Rwanda’s main but tiny opposition, the Democratic Green Party, tried to block the amendment to extend Kagame’s term, but a court rejected the bid. Critics say the government stifles opposition politicians and media, a charge officials deny. Speaker of the 80-seat lower house, Donatille Mukabalisa, said Article 172 of the amended constitution was supported by all 75 lawmakers present and meant Kagame could stay on until 2034. “No law stops him,” she told a news conference. Kagame has not said explicitly he wants to run again but has said he is open to persuasion.

Article 172 allows Kagame to serve out his seven-year term that ends in 2017 and also to seek a third seven-year term after that. Even beyond that he could seek two more five-year terms, a lawmaker said, explaining the amendment.

The debate about term limits has flared across Africa.

In Burundi, President Pierre Nkurunziza sparked months of protests and a failed coup when he decided in April to run for a third term. Opponents said it violated the constitution and deal that ended a civil war there. A court ruled he could run again.

In Congo Republic, voters backed a change to allow President Denis Sassou Nguesso to run for a third consecutive term. The opposition had called for a boycott of that vote.

Kagame won international and domestic praise for rebuilding Rwanda after the chaos of the 1990s. Some 800,000 people, most of them Tutsis and moderate Hutus, were massacred before rebel forces led by Kagame ended the genocide.