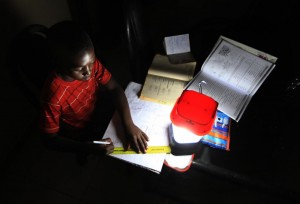 In this photo taken Wednesday Sept. 2015, a student does his homework using a solar lantern in Harare, Zimbabwe. The normal rains did not fall, which caused water levels to drop in dams that produce electricity, so local people and businesses across Zimbabwe and Zambia are suffering power black-outs for up to 48-hours at a time. Some traditional chiefs blame an angry river god, but the government blames the lack of rain, and work to expand the Kariba power station will not be complete for at least three years, said Partson Mbiriri, permanent secretary in Zimbabwes ministry of energy and power development. (AP Photo/Tsvangirayi Mukwazhi)[/caption]

HARARE, Zimbabwe (AP) — With the rains not having fallen as they normally do, water levels have dropped in a dam that supplies electricity to Zambia and Zimbabwe, causing power blackouts, business closures and consternation. Some traditional chiefs are blaming an angry river god.

Zimbabwean media, citing the chiefs, said the low water levels at Kariba Dam, built in 1960 on the border between the two countries, could be due to failure to conduct traditional rites. The flow of the Zambezi River, which feeds the dam, has also dropped, depleting the famed Victoria Falls of its majestic power. The Kariba power station is a major provider of electricity to the neighboring nations. Traditional leaders on both sides of Kariba Lake, which is formed by Kariba Dam and is the world’s largest man-made lake by volume, have conducted rain-making ceremonies to try to stem further decline of water levels. They plan to appeal for rain in another ceremony on Saturday. Former Zambian Vice President Guy Scott, who was interim president for three months until January, blamed the problem on “a weak regulator sitting between two puppies drinking milk from the same saucer,” referring to Zimbabwe and Zambia both trying to exploit the dam as much as possible, local media reported.

Now, industry and households in parts of Zimbabwe are enduring power cuts for as many as 48 hours at a time, forcing massive production cuts for already struggling companies. Households are learning to do with firewood-cooked meals. Problems at other Zimbabwean power plants besides Kariba have exacerbated the shortages.

In Zambia, stretches of eight hours without electricity have become common.

Mopani Copper Mine, operated by Canada’s Glencore, said it would pull out of the country by next year, citing low mineral prices and soaring production costs due to erratic power supply. The Chinese-run CNMC’s Baluba copper mine, has closed, partly because of the electricity problems.

Small businesses that employ many Zambians such as hair salons and bakeries are also badly affected, Lungu said.

“The electricity shortages have left us in a fix,” said David Matyanga, economist for Zimbabwe’s Chamber of Mines. Mining contributes 15 percent of Zimbabwe’s GDP and 53 percent of foreign exchange earnings.

Because of that fix, alternative energy sources are being sought. Zimbabwean Vice President Emmerson Mnagnagwa told his nation’s parliament on Sept. 23 that the government is seeking commissioned sub-contractors to supply 600 megawatts of electricity. The British firm Sable Mining Africa and Chinese company firm Citic Construction Company Ltd have signed an agreement with Zimbabwe to build a $500 million coal-fired power plant.

Mbiriri said legislation is being drafted to ban the use of water heaters, which he said takes up to 40 percent of domestic electricity use. There are plans to install solar-powered water heaters nationwide.

In Zambia, the government plans to double the average retail electricity tariff early next year. President Lungu said he is hoping for investment in renewable energy such as solar and waste-to-energy projects.