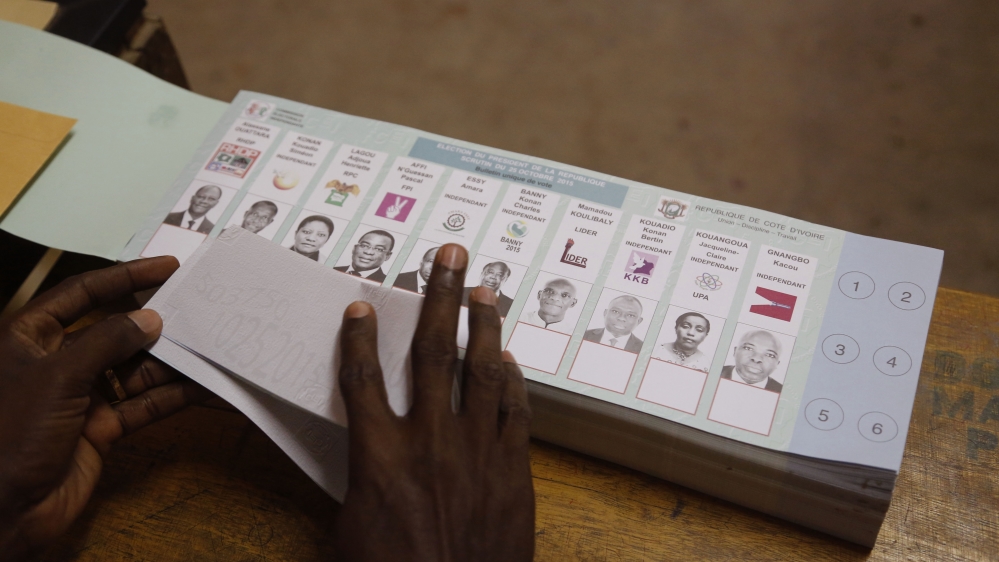 Ivory Coast is voting in a presidential election likely to give President Alassane Ouattara a second term, an event that is closely watched by investors after a decade-long political crisis that ended with a civil war in 2011.

Ouattara faced a divided opposition on Sunday, although a partial boycott and voter apathy could result in low turnout.

“This is a high-stakes election for Ivory Coast. It could draw a line under the violence that exploded after the last election and cement Ivory Coast’s economic revival which has all happened under current President Alassane Ouattara who is heavily favoured to win this vote,” Al Jazeera’s Tania Page said, reporting from the capital Abidjan.

More than six million Ivorians are registered to vote at about 20,000 polling stations. The elections commission has introduced new technology, including computer tablets, to verify their identities.

Few expect serious violence to mar the election, which sees voters with a choice of seven candidates for the presidency. But tens of thousands of soldiers, police and gendarmes have been deployed across the country to secure the vote.

Voter turnout will be critical to legitimising Ouattara’s mandate if he wins as expected. Leaders of a break-away faction of the Ivorian Popular Front (FPI), the party of ex-president Laurent Gbagbo, have called for a boycott of the election.

Gbagbo’s refusal to recognise Ouattara’s 2010 poll victory sparked the civil war. Gbagbo himself is now in The Hague awaiting trial before the International Criminal Court charged with crimes against humanity.

The FPI hardliners have been joined by three candidates, including former Prime Minister Charles Konan Banny, who pulled out of the vote, saying the process was stacked in Ouattara’s favour.

Polling stations in pro-Gbagbo villages in the former president’s home region around the southwestern cocoa hub of Gagnoa were devoid of voters.

“My president is in prison,” said Yves Titiro, a cocoa farmer in the village of Zebizekou, near Gagnoa. “In the north there will be an election, but it has nothing to do with us here.”