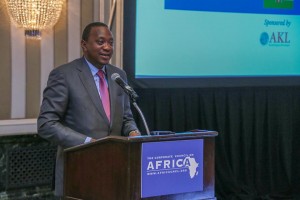 President Uhuru Kenyatta.[/caption] The President said the Special Economic Zones Act he enacted recently revolutionizes the business environment for industries operating in Kenya as it has removed restrictions previously affecting companies based in export processing zones. “Our new special economic zones law allows you to manufacture goods that you can sell to Kenya and export to the region as well as the rest of the world,” the President said when he addressed   a meeting hosted by a consortium of US companies and the Corporate Council on Africa on Tuesday morning. The special economic zones law provides incentives for industries to operate in designated zones including Naivasha, near the Ol Karia geothermal power plants. Companies that set up bases in the designated economic zones will be given special power tariffs that will enable them to reduce their cost of operations, said the President. President Kenyatta said the Standard Gauge Railway, whose construction is underway between Mombasa and Nairobi, will soon be extended to Naivasha before it is finally stretched further to the western borders of the country. The SGR will enable the swift transit of goods between the port of Mombasa and the wider Eastern Africa region. President Kenyatta said the integration process going on in the East African Community will enable companies operating in Kenya to benefit from a larger market. He said opportunities for US firms in Kenya are immense and in diverse sectors, including the generation of power where the Government has started changing its policies of investment. “We have set the base as Government and we no longer want to continue being the biggest investor in power generation. We want to leave that role to private investors and we invite you to our market,” said the President. The US Assistant Secretary of Commerce for Global Markets, Mr Arun Kumar, said the US government understands that bilateral commercial opportunities abound in Kenya. He said there has been an upsurge in US investments in Kenya after President Kenyatta’s visit to the US in 2014 when he held high-level meetings with American corporations. The subsequent visit by President Obama to Kenya recently has further increased the involvement of US companies in foreign direct investments flowing into Kenya, said Mr Kumar. “The US government is now in a position to support you to achieve your vision 2030 and we are glad to have you as our partner,” said Mr Kumar. After the first session involving President Kenyatta, the meeting continued with the presence of Cabinet Secretaries Adan Mohamed (Industrialisation), James Macharia (Health and acting CS for transport, infrastructure) and Phyllis Kandie (EAC, Commerce and Tourism). Solicitor General Njee Muturi also participated in the meeting. Foreign Affairs Cabinet Secretary Amina Mohamed and the Cabinet Secretary for Interior, Maj Gen (Rtd) Joseph Nkaissery took part in the first session of the meeting before leaving with President Kenyatta to attend a high-level meeting on South Sudan. The Corporate Council on Africa is the premier American organization devoted to US-Africa business relations. The CCA has a membership of more than 180 companies representing nearly 85 per cent of the total American private sector investments in Africa. This is the third meeting the council has hosted for President Kenyatta with the previous ones held in  2014. *Source KBC]]>