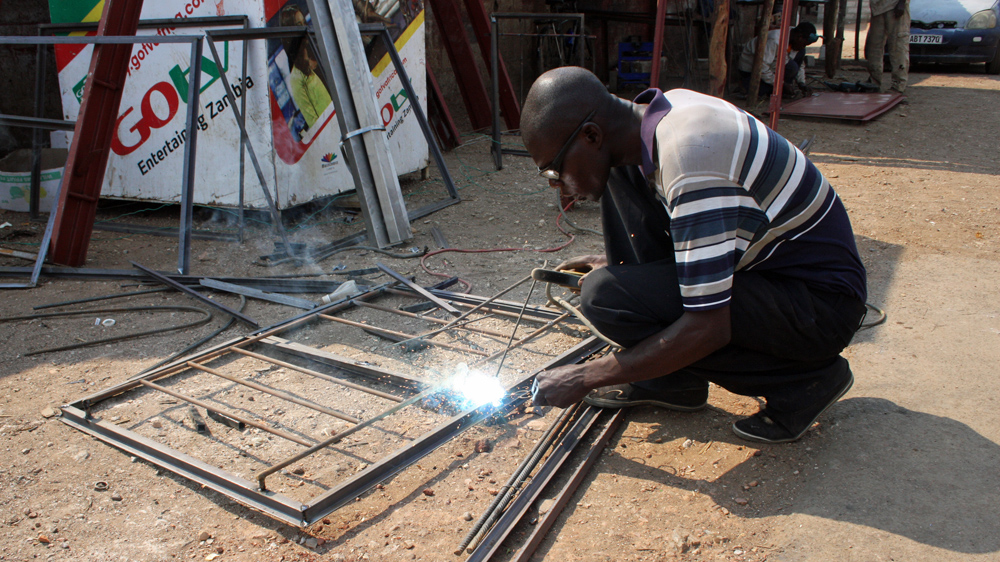 Bauleni, Zambia – An eerie silence pervades along a street of empty welding, carpentry, and auto shops mid-afternoon on the outskirts of the capital, Lusaka.

“No power means no business,” said bartender Patrick Mbewe at the nearby Tiger Woods bar.

“The leadership should have prepared for this a long time ago. Children can’t study at night,” chimed in farmer Evans Chisokwe, one of Mbewe’s more resilient customers, in Bauleni township.

The energy crisis has worsened since August, and now, daily eight-hour load shedding power cuts are having profound effects, ranging from businesses laying off staff to deforestation increasing as people use charcoal to cook. One Lusaka taxi driver suggested there’ll even be a rise in pregnancies because of the long, drawn-out nights.

“At night if there’s no power, I usually read the bible,” 52-year-old Stanford Mwanza said in his Bauleni home next to his carpentry workshop. “But it’s hard to read by candlelight.”

Load shedding for Bauleni’s 15,000 residents follows a continuous rotation of power – on for eight hours then off for eight, while schedules vary across the Zambian capital for its 1.4 million population.

“If power comes on at night, you don’t feel like working,” said welder Jabulani Keswa, “Then when you wake up, there’s no power.”

Keswa looks at an unfinished window frame on the ground: “The owner wanted this yesterday.”

Inside Mwanza’s compound awaits a long line of buckets beside a tap – many Bauleni homes don’t have taps, hence neighbours come to Mwanza’s once power returns and water pumps start.

“During power cuts, there’s no water for toilets and it’s hard to wash clothes,” said Dinna, 49, Mwanza’s wife. “Sometimes we have to get up at 3am to fill the buckets.”

“There’s no more water for mixing mortar today, so I knocked off,” Mugabe said. “I work by contract and will get paid late, as the house I’m building will take longer.”

Over in Tenderer East, a larger Lusaka township, 59-year-old taxi driver Grivin Phiri tasks two teenage sons every morning to roll a large, blue 210-litre barrel to a communal water tap to supply the household’s nine occupants, who rely on a charcoal brazier for cooking during power cuts.

“With solar, you pay once to install it and then it runs by itself, but with electricity, you pay the company to set it up and then have to pay every month,” Phiri said, chuckling while shaking his head.

Down the street from Phiri’s house, large sacks of charcoal are stacked in a stall. Demand for the cooking fuel has increased significantly, as have prices for a population with many living on a couple of dollars a day.

“Charcoal supplies are often sold out by 10 in the morning rather than by four in the afternoon,” Lusaka-based conservationist Jo Pope said of the popular energy source made by burning wood slowly.

“Even before the power cuts, Zambia had the fastest rate of deforestation in Africa.”

Zambia previously had one of Africa’s fastest growing economies, expanding on average 7 percent annually over the past five years, spurred by the mining of its huge copper and cobalt reserves.

But lacklustre rains coincided with a downturn in world prices for minerals, dealing the country’s economy a further sucker punch.

Ramifications that include a plummeting currency, the kwacha, against the US dollar have hit everyone – from multibillion-dollar international mining company Glencore, to midsize local manufacturing companies, right down to Bauleni’s butcher shops.

“If food in the freezer defrosts, we have to throw it away. So when power goes, we must use a generator, which is expensive,” said 22-year-old Bismark Musheke.

Many businesses can’t absorb such unplanned costs. A decent-sized quality generator for a modern, 20-staff-strong office can cost up to $14,000, while needing constant supplies of imported petrol or diesel, again subject to foreign exchange volatility.

In emerging economies, power cuts typically cause 40 percent additional costs to industry, according to the Wold Bank.

“As costs of doing business increase, output decreases and businesses become less profitable, which impacts negatively on tax receipts payable to the government,” said a foreign business adviser in Lusaka, who didn’t want to be named because he works with the government.

“Then there’s less money to invest in infrastructure, development, and debt repayment – it’s a vicious cycle.”

In Bauleni, reduced output means a large wardrobe taking Mwanza about two months to finish instead of three weeks, he said, while welder Keswa said he makes about two window frames daily instead of five.

Almost all Zambia’s generating capacity is hydroelectric, the largest proportion usually coming from Kariba Dam and the world’s largest man-made reservoir in the Zambezi river basin between Zambia and Zimbabwe.

“On the news, we’re told it’s because water is low at Kariba Dam – that’s the only thing we hear,” bar manager Elise Matafwali, 33, said of the power crisis. “But others say the government’s been selling electricity to other countries.”

The parastatal Zambia Electricity Supply Corporation (Zesco) is a signatory to bilateral power-sharing agreements with surrounding countries – all buy and sell because storing excess electricity on a large scale isn’t possible – although Zesco claims to have now suspended exports.

Others, however, suggest exports continue at the same time as importing electricity from the likes of Mozambique because cancelling contracts would be too costly.

“I’ve been insulted and even slapped by irate customers,” said one Zesco office manager, who spoke on condition of anonymity. “But we could be the best electricity company in Africa – we have so many water resources.”

“Zambia’s – and sub-Saharan Africa’s – energy crisis is caused by a lack of planning, a lack of investment, as a result of low tariffs and prevarication by politicians, and poor management of the resource,” said Mark Pearson, a Lusaka-based independent consultant.

“We have known there would be an energy shortage for years and have allowed this situation to develop through inaction.”

Now everyone waits expectantly for the rainy season due at the end of October.

But even if the hoped-for rains come, water levels will take time to rise sufficiently. No one seems to know when Zambia will return to full capacity.

“I’ve heard the power cuts will last until January – imagine,” said Mwanza putting a layer of varnish onto a wardrobe during the afternoon power cut. “We’re praying for the rains to come.”