Vatican City (AFP) – Pope Francis will visit a refugee camp and a mosque in the Central African Republic as well as a slum in Kenya during a trip to Africa next month loaded with potential security risks. 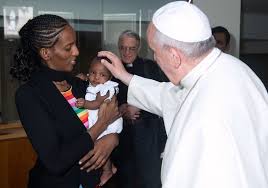 The pontiff will be in Kenya from November 25 to 27, spend the next two days in Uganda and travel on to the Central African Republic (CAR), where the trip will end on November 30, according to a Vatican itinerary published Saturday.

The three countries have significant Catholic communities and have been troubled by civil conflicts and violence, which will increase concerns surrounding possible attacks during the visit.

In Nairobi, Francis will tour the Kangemi slum, home to some 100,000 people who live in shacks without sewerage systems, including 20,000 who belong to the local Catholic parish.

Though he regularly visited slums in Buenos Aires in his native Argentina before becoming pope, Francis’s tendency to head off unannounced from secured areas to mingle with the crowds will be a headache for his bodyguards.

Islamic rebels have staged a string of attacks in Kenya, including the April massacre at Garissa university in which 148 people — mostly Christians — died, and the 2013 assault on the Westgate shopping mall that killed 67.

The pontiff will meet with representatives of Kenya’s multi-faith community in a bid to promote inter-religious dialogue.

In Entebbe in Uganda, Francis will commemorate the canonisation by Paul VI in 1964 of the first African saints — 22 young people killed in 1878 on the orders of the local ruler because they refused to renounce their Christian faith.

And in Bangui, the CAR capital, the pontiff will tour a refugee camp before visiting the city’s central Koudoukou mosque to meet representatives of the Muslim community.

The trip will wind up with a final mass in the Barthelemy Boganda football stadium.

Here too security will be tight: the CAR descended into bloodshed after a 2013 coup against longtime leader Francois Bozize unleashed a wave of violence, pitting Christian anti-balaka militias against mostly Muslim Seleka rebels.

Security at the Vatican was stepped up in February because of a perceived heightened risk of attacks by Islamist militants, with the head of the Vatican’s Swiss Guard confirming additional precautions had been taken to ensure the safety of Pope Francis.