Polline Akello was abducted at 12 and recruited into rebel Joseph Kony’s army in Uganda. She fell pregnant at 16 but managed to escape, her story is one of extraordinary courage and resilience By Arthur Chatora* [caption id="attachment_21646" align="alignleft" width="300"] 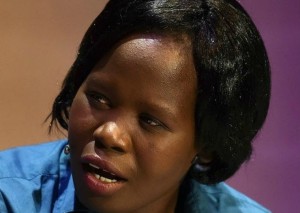 Polline Akello: From child soldier to global advocate[/caption] Children living in conflict zones continue to bear the brunt of wars as direct and indirect victims. Young children continue to be recruited as soldiers with devastating effects on their lives. Rape and sexual violence are everyday lived realities for many of these children, which destroys their childhood and future. The case of Polline Akello who, at 12 years-old, “was snatched from her home and forced to become a soldier” in Joseph Kony’s Lord’s Resistance Army (LRA), speaks to the devastating effects of war on children. Akello’s story is one of extraordinary courage and resilience. Akello spoke to the BBC about her harrowing experiences as a child soldier and says, “all the years I spent there, I had no hope. We we were forced to cook and we were taken as sex slaves and we were forced to [walk] long distances”. “At 16 she fell pregnant after being forced to become the ‘wife’ of a rebel commander,” According to humanitarian organisation, War Child. Akello who is now aged 26, managed to escape when she was admitted at a hospital in Nairobi after an accident and losing her baby. She now shares her story in schools around the world to highlight the devastating effects of armed conflict on children. Akello says war victims are often silenced by “shame”,  “they feel [speaking out] brings shame on them … I can’t sit and keep quiet”. Akello says she will continue sharing her story and, according to the BBC, she will speak at the World Conference in London this Friday. Next week she will address the UN. According to War Child, which provides support to vulnerable children and communities, “There are an estimated 250,000 child soldiers in the world today. It is estimated that 40% of all child soldiers are girls. They are often used as ‘wives’ (i.e. sex slaves) of the male combatants”. *Source This is Africa/BBC]]>