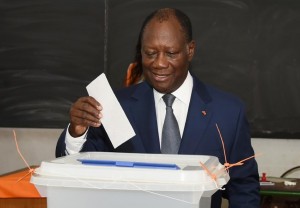 The 73-year-old won a second five-year term outright by garnering almost 84 percent of ballots in the first round of polls Sunday, when more than half of voters turned out despite calls for a boycott by opposition candidates.

Ouattara, who had been widely tipped to win, has been credited with reviving the economy of the war-scarred country, the world’s leading cocoa producer, but also accused of creeping authoritarianism.

His main challenger was ex-prime minister Pascal Affi N’Guessan, who won just 9.3 percent of ballots and ran on behalf of the Ivorian Popular Front — the party of former leader Laurent Gbagbo.

Ouattara unseated Gbagbo in 2010 but the then president refused to concede defeat, sparking a wave of violence which left around 3,000 people dead.

Gbagbo was eventually defeated by pro-Ouattara forces, backed by the UN and France, who dragged him from a bunker under the presidential residence where he had hidden for days.

He is now awaiting trial before the International Criminal Court in the Hague for crimes against humanity over atrocities committed in the five-month conflict.

Commentators had questioned whether people would head to the polls after the violence, but Ivory Coast’s electoral commission said 54.6 percent of those eligible had voted.

The process won praise from observers as being fair and peaceful and the president of the national electoral commission, the CEI, said that after the vote “the crisis of 2010 is behind us”.

Before the official results were announced, the National Coalition for Change (CNC), which represents two presidential candidates, had put the turnout figure at 20 percent, calling the vote a “parody”.

Ouattara had said a high turnout would be key to cementing his mandate for another five-year term from the 23 million people registered to vote across the country.

The streets of the economic capital were quiet early on Wednesday after news of the results, in stark contrast to the violence that plagued Abidjan after the last vote, when 34,000 troops including 6,000 UN peacekeepers were deployed to secure the streets.

Ouattara too has come under criticism over his alleged role in the post-2010 electoral violence and in the lead-up to the latest vote.

Amnesty International has slammed the detention of opponents ahead of the latest poll while rights campaigners have said little justice has been meted out to members of his own camp since the 2010-2011 crisis that brought him to office.

In third place in Sunday’s vote was Kouadio Konan Bertin with 3.9 percent. One of the principal opposition candidates, he had already conceded defeat on Monday and congratulated Ouattara, who should be sworn in next month. A peaceful and credible election was seen as crucial to help Ivory Coast recover its former status as a beacon of progress and prosperity in the region. [caption id="attachment_21933" align="alignright" width="300"] 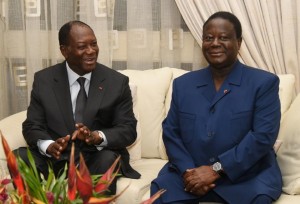 Ivorian President Alassane Ouattara (L) talsk to former President and the President of the Democratic Party of Cote d’Ivoire, Konan Bedie Henri, during a meeting in Abidjan, on October 27, 2015 (AFP Photo/Sia Kambou)[/caption] growth at around nine percent, Ouattara — a prominent economist and former deputy head of the International Monetary Fund — had staked his campaign on his economic track record. He has also promised to reform the constitution and submit the changes to a public referendum. A parliamentary election is due within two months.

Known as “Ado” after his initials, the president was barred from running in the 2000 race over questions of his national identity, leaving Gbagbo to take power.

While he was born in central Ivory Coast, Ouattara did most of his schooling in Burkina Faso and later worked there, prompting accusations he was not sufficiently Ivorian to lead the country.

He is known as a tireless worker needing little sleep who is said to “wear out his staff”.