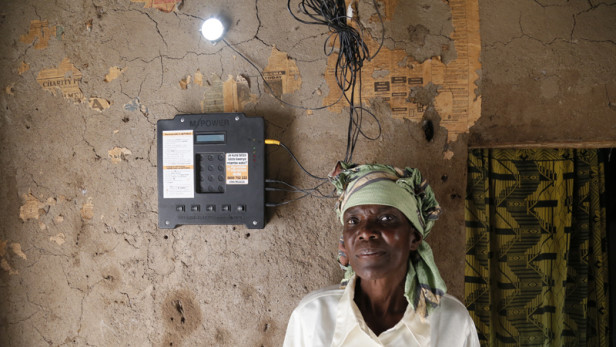 What’s helped create this progress is a mix of factors: technology costs have dropped making pricing more competitive, investment has increased and, in some cases, governments have created favorable environments for progress. When IFC first began working to explore solar technology 15 or 20 years ago, home solar systems cost $500 to $1,000, which even with the most creating leasing model was still unaffordable to those living on less than $2 a day. But between 2000 and 2013 the efficiency of these systems improved by about 10,000 percent and the costs of batteries, LED lights, and photovoltaic cells, all dropped more than 80 percent, according to Sturm. LED lights, along with an an emerging set of appliances, are also dramatically more efficient. This means the same 40 watt solar panel that 10 years ago could power one 25 watt light bulb can today power four LED lights, a color tv, a phone charger and a radio. As those prices went down and efficiency went up, a market opportunity emerged. If only those products could be marketed in a way that competed with products people were using (which in most cases were kerosene or battery-powered flashlights). That’s where some early funding from the development industry helped — IFC started working on setting quality standards, providing market intelligence, business assistance and education programs for consumers.

Several years ago innovation really started around solar lanterns and donor darlings liked.light drew attention and funding. While some might dismiss these solar lanterns — Sturm describes them as “underappreciated” — they are an important “first rung on the energy ladder,” he said. From solar lanterns, consumers can step up to home solar panels or to microgrids, though their set up has proven more complex. “What we see is governments slowly picking up that there is more to access than grid extension,” said Koen Peters, executive director of the Global Off-Grid Lighting Association. “The market is developing in a very dynamic way.” And this shift on the part of local governments — perhaps too for donor governments — has led to a slew of recent announcements and commitments designed to bring more funding and attention to the industry. Several of these new investments by the U.S. government fall under the Power Africa Initiative, which with these announcements and other funding, is clearly now going to support solar, off-grid power. That’s a big of a departure from the early days of the initiative. While the launch of Power Africa included included both megawatt and access targets, many of the early announcements focused on large-scale, grid-connected generation. “What I think has happened is there has been a maturity of business models for OPIC to credibly finance,” said John Morton, the Overseas Private Investment Corp’s chief operating officer. “We want to grow the access piece of our portfolio.”

While all those advancements in technology and plunging costs have opened up the market, what’s making it possible and leading to exponential growth for some companies is the innovation around business models. Companies like M-KOPA Solar, which installs home solar systems and hit 250,000 sales in September, uses a pay-as-you-go system integrated with the M-pesa mobile money platform. This allows customers to sell solar power on a monthly, daily, weekly or even hourly basis. The model seems to be working — the company had 60,000 customers in April 2014 — so there is a fast pace of growth. In Tanzania, Off Grid Electric — which guarantees service for the lifetime of the product and operates a 24/7 call center to respond to customer needs — has deployed a leasing model and is adding 10,000 customers a month. The company estimates that 80 percent of the Tanzanian population could be potential customers and that their pricing is not only competitive with kerosene and phone charging, but is possible even for those living on less than $2 a day. The company is now in its 10th cohort and recently expanded to a large new office building in Arusha, Tanzania. This was in part to house the Off Grid Academy: as they started building their workforce they recognized a need for more skilled employees, so they built one in-house and around 500 people have been hired through the training program.   https://youtu.be/Cw3vNViw20A     “We’re hoping gather support around that, because it’s quite new to business,” said Jessica Eastling, business development manager at Off Grid Electric, adding that they are still working to improve it and get it right. There are also many others, though most of the early success stories are coming from East Africa, which according to Peters is in part due to demographics but also as a result of market conditions. The pervasiveness of mobile money systems has made business models easier to develop. Nova Lumos, which just received a $15 million loan from OPIC to finance its expansion, is one of the companies testing the waters in West Africa. The company works in Nigeria for a fairly simple reason — it’s the largest market in Africa. But what’s needed in the Nigerian market is somewhat different than the smaller home solar systems that have been succeeding in East Africa. Many potential consumers in Nigeria use diesel-powered generators instead of kerosene and have greater power needs. The Nova Lumos system provides the added capacity — it uses bigger panels — and the company has set up a unique arrangement with the country’s largest mobile network operator MTN. The systems are shipped directly to MTN storefronts and are sold through its existing distribution networks, with marketing also done by MTN. In a country where mobile payments aren’t often used, Nova Lumos is allowing consumers to use phone credit to pay for electricity.

The industry is still young and the market opportunity is massive. That means that issues of financing, ensuring quality standards, developing metrics and enabling scale all need to be on the agenda. And they are at the GOGLA conference. Financing, particularly debt financing and working capital financing will be important. Many of the companies operating today need to reinvent their business models repeatedly in order to grow. “This sector is growing but is not fully commercial yet … [they] still need public sector support,” Peters said. “They don’t necessarily need subsidies anymore but they do need the public sector to help mobilize investment and build capacity.” Nir Marom, Nova Lumos co-founder, said that the OPIC investment is important, not just for the money but as a commitment to prove that debt investments in the space can be successful. “Estimates are that the market is millions, you can’t do that without debt,” he said. Similarly, companies — particularly in the solar lantern sector — are hamstrung by their ability to get access to working capital, Sturm said. In fact, sales of quality-verified solar products were flat based on a June year-on-year comparison. So what’s the problem? It’s not growth. There is money out there from investors, especially for the frontrunners who have shown they can deliver returns, but what’s been lagging is working capital. For companies that rely on cash sales and are selling devices to retailers it’s a critical component to operating and growing business. Companies have told Sturm they expect they could continue on the path they were on a year ago with 100 percent year-on-year growth if they had working capital. IFC is working to help leverage additional financing, in part through its $10 million investment in ResponsAbility’s Energy Access working capital debt fund. The World Bank Group member would like to invest more in this area, according to Sturm, and is interested in working with local banks to create new types of financing to support customers who want to buy these products. Government regulations can have a big impact on market growth. Countries that are not corrupt, have supportive business environments, don’t have a high kerosene subsidy, generally have low tariffs and import fees, and decent infrastructure will be the most appealing. Working with countries to change bad policies and encourage favorable ones will help future industry growth. As an industry association GOGLA is also working to identify minimum quality standards and will look for ways to hold those not in compliance accountable. IFC has been working on quality assurance for years and has worked to build its quality-verified system, which can be and is used as a benchmark, particularly for products like solar lanterns. Having standardized measurement, particularly of social impact, will help get all companies on the same page when it comes to reporting. It’s an issue also likely to be discussed at this week’s meeting. And while innovation may happen at a slower place, there’s plenty of room for more — particularly in products and appliances like low-watt televisions and fans that consumers are demanding. Because as people gain access to electricity they tend to want to move up the energy access ladder pretty quickly. So making that affordable, and providing the finance and the business models to make it happen, will be important. *Source Devex.To read additional content on innovation, go to Focus On: Innovation in partnership with Philips.]]>