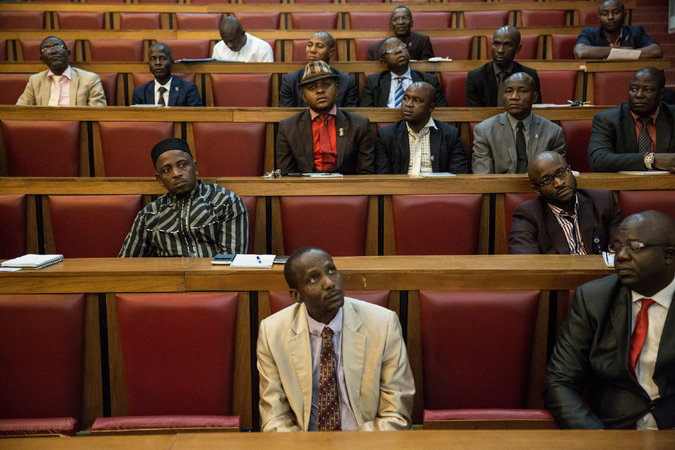 Legislators from southeast Nigeria attended an anticorruption training session on Wednesday in Abuja, the capital. Credit Glenna Gordon for The New York Times[/caption]

ABUJA, Nigeria — Private jets that used to crowd the airport here have been grounded, their wings clipped by the new government’s crackdown on corruption. Rolls-Royces, Range Rovers and Jaguars are gathering dust in the showroom of this capital’s top car dealer. Luxury villas are left unsold, as is the fine Italian marble used to bedeck the homes of Nigeria’s newly rich.

Since assuming power in May on a pledge to root out the graft that has long permeatedNigeria, President Muhammadu Buhari has squeezed the flow of public funds in an effort to clean up Africa’s biggest economy.

He has put many public projects on hold to review the contracts, and ordered many government ministries, departments and agencies to consolidate their bank accounts for closer monitoring of financial transactions. He has overhauled the management of the state oil company, while also moving to retrieve stolen money.

In recent days, the campaign escalated with the arrest of two high-profile figures: Diezani Alison-Madueke, the former oil minister whose five-year tenure was marred by recurring accusations of widespread theft; and the chairman of a Nigerian oil company. Both were held as part of inquiries into corruption and money laundering.

“Those actions will sustain the fear that the culture of impunity is over and government’s will to prosecute is strong,” said Adams Oshiomhole, a governor leading a national panel investigating federal graft. “There’s no more free money flowing because of the attempts by the president to block it, but also the fear that, ‘If I’m caught now, I’ll be prosecuted.’”

Nigeria, Africa’s most populous nation, is the continent’s top oil producer and one of the biggest producers in the world. Yet corruption has undermined the nation, helping to keep 68 percent of its population living on less than $1.25 a day and perpetuating instability, especially the long-running conflict with Boko Haram.

Whether Mr. Buhari can maintain the pressure against graft, much less transform a society where corruption thrives at all levels, is far from clear. Over the years, previous assaults on the problem have fizzled. Mr Buhari himself first rose to power in a military coup in the 1980s, waging a self-described “war against indiscipline” during his short reign as military ruler.

But this year, with national frustration boiling over corruption and the rampages of Boko Haram, the extremist group that has terrorized northern Nigeria, Mr. Buhari won the presidential election in March as the head of an opposition alliance that is tasting power for the first time. Now many politicians and businessmen say he is facing growing pressure to reward the faithful.

The widening anti-corruption drive has chilled the economy elsewhere in the country, but nowhere has its impact been felt as keenly as here in the capital. 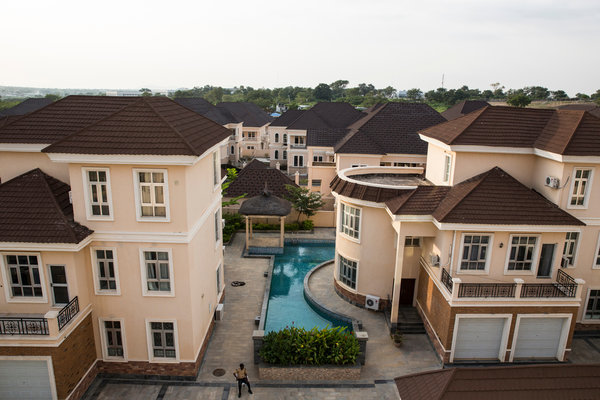 At Royal Choice, a private housing estate on the outskirts of Abuja, 20 mansions have been built but only two are occupied. Buyers have used estates like this one as investments and eagerly bought up property, often paying in cash. Credit Glenna Gordon for The New York Times[/caption]

At Coscharis, the leading dealer of luxury cars here, Happiness Adibe has been going through her worst year in her nine years as a saleswoman. Last year was her strongest: a record number of buyers, mostly businessmen and politicians, spent hundreds of thousands of dollars buying Range Rovers and Jaguars from her. Seventy percent of her customers paid cash.

“There’s no money now, no money,” Ms. Adibe said. “Contracts aren’t going on now, everything is standing still. When contracts are going on, people are getting contracts and doing their, you know, thing.”

At Royal Choice — a gated community of villas selling for up to $1.8 million each, some furnished according to a London, New York, Dubai or Shanghai theme — Joshua Bialonwu has not scored a single sale since the new government took over. Under the previous administration, customers often bought villas in cash.

On a tour through Royal Choice’s eerily deserted streets and inside several villas, each empty except for a guard and a cellphone charging from a wall, Mr. Bialonwu explained why sales had dried up.

“With the uncertainties of the government presently, nobody knows how much you might be asked to return,” Mr. Bialonwu said. “So you want to hold on to as much as you can.”

Negotiations over what to do with ill-gotten gains are taking place quietly.

Nasir El-Rufai, the governor of Kaduna state and a member of the panel investigating graft, said that associates of one former minister had approached him with an offer to return $250 million.

“When you say you want to refund, it means you are admitting that you took what was not yours,” Mr. Rufai said. “I said, ‘I am a governor, I am not involved in this. I will pass on your message.’ ”

Many officials and businessmen said that graft under former President Goodluck Jonathan reached levels not seen since military rule ended in 1999. Billions of dollars are believed to have disappeared from activities related to the oil industry, the source of 80 percent of all government revenues.

Last year, after the governor of the country’s central bank asserted that billions of dollars in oil revenue owed to the treasury was missing from public coffers, he was removed from his post.

The missing funds could amount to “$10.8 billion or $12 billion or $19 billion or $21 billion — we do not know at this point,” the bank governor wrote to the Nigerian Senate before his dismissal, adding that the problem could “bring the entire economy to its knees.”

The Nigerian National Petroleum Corporation, the state oil company, spent half of what it collected on its own operations, Mr. Rufai said.

“The corrupt try to take money under the table,” he said. “Under Jonathan’s government, it is done so openly, with records. People actually document the diversion of funds. You just wonder, what is wrong with them.”

The loss of oil revenues has left many of Nigeria’s 36 states bankrupt or nearly bankrupt, unable to pay salaries.

Corruption in other sectors of the government was equally self-destructive, said Mr. Oshiomhole, the federal graft panel leader. 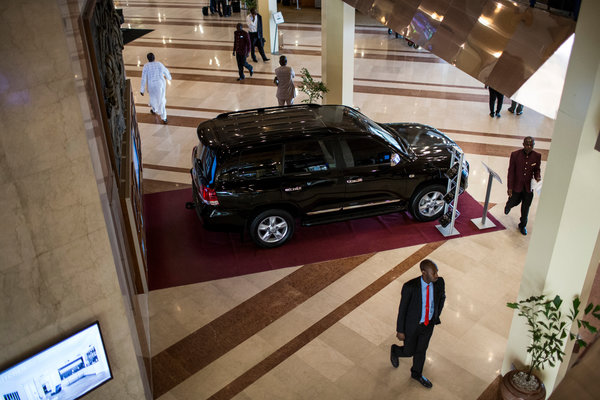 An armored car on display in the lobby of a Hilton hotel in Abuja. At many upscale hotels and businesses in the capital, commerce has slowed this year, which many attribute to the government’s crackdown on corruption. Credit Glenna Gordon for The New York Times[/caption]

Money meant for the purchase of arms in the army’s fight against Boko Haram vanished, leaving soldiers without proper equipment. The privatization of the state power utility was riddled with fraud, enriching individuals but leaving most Nigerians still without electricit

An import duty waiver granted to a politically connected Indian rice importer has dumped one million tons of substandard rice in Nigeria, Mr. Oshiomhole said, adding that a big farmer in his state, Edo, shelved plans to grow rice as a result.

Here in Abuja, people with no particular expertise but solid political connections made fortunes.

“Nothing better explains the amount of theft that went on that somebody without a business — he has a small office in the corner of his house with an iPad and a cellphone — has jets,” Mr. Oshiomhole said. “Everybody was just buying jets.”

The cash fueled a boom in high-end real estate development in the capital, Abuja, and in Lagos, the nation’s main city. Villas and condominiums built or purchased to launder money tellingly remain unoccupied, real estate agents and businessmen say.

At Pated, a store that has sold Italian marble to the Abuja elite for decades, some politicians and high-ranking civil servants came to make large purchases in their official vehicles, said John Abimiku, a salesman. Others were more discreet, or tried to be.

“If you are dealing with a private businessman, you see a lot of prudence in terms of managing their resources,” Mr. Abimiku said. “But if it’s a politician, you tell him a price and he doesn’t argue too much. ‘O.K., it’s all right, it’s all right. Let’s have it.’”

But Sadiq Yaqub, Pated’s manager, said business now was the “worst it’s ever been” in the 12 years he has worked at the store.

To press ahead, the Buhari government will back a new law to prosecute cases of corruption more quickly, said Itse Sagay, a legal scholar and human rights activist who now leads another presidential panel against corruption.

No high-profile case of corruption has been prosecuted successfully in the past decade, reinforcing a culture of impunity, Mr. Sagay said. Wealthy defendants have been able to exploit legal maneuvers to draw out trials for more than a decade.

Mr. Sagay said that his panel is also focusing on reforming the handful of government anti-corruption agencies, which, he said, have been “contaminated” by officials working in concert with those they are supposed to be investigating.

Mr. Akinrinade acknowledged, though, that previous governments had also had strong starts. After being elected president in 1999, Olusegun Obasanjosurprised many with an equally aggressive push against corruption. But within a year or two, it was business as usual in Nigeria.