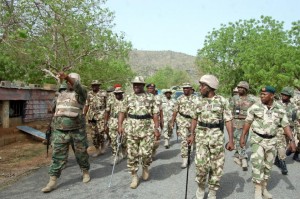 “They should follow their colleagues who have so far surrendered. Failure to surrender will result in serious consequences as our troops are fast closing up on them,” army spokesman Colonel Sani Usman said in a statement.

“We wish to inform them that we are aware of all their hideouts, camps and enclaves,” said the statement sent to AFP.

The military has claimed that more than 200 members of the militant group surrendered September 25 when troops regained control of the northeastern town of Banki, a launching point for attacks into Cameroon.

There was no independent verification of the military’s statement. Boko Haram has denied its members surrendered and that 241 women and children were rescued when troops cleared what the military said were “terrorist camps” near Banki. The statement on Sunday appealed to all Nigerians to persuade them to desist and renounce their membership of the group. Nigerian President Muhammadu Buhari has set his military commanders a three-month deadline to early November to end Boko Haram violence, which has left at least 17,000 dead since 2009, mostly in the three affected states in the northeast: Borno, Adamawa and Yob. The military has claimed a series of successes against Boko Haram recently, including the rescue of the 241 women and children. But the group struck again this weekend, with 41 people killed on Saturday and 48 were wounded in triple explosions in a Chadian city on the shores of Lake Chad, blamed on Boko Haram, the government in N’Djamena said Sunday. Lake Chad is bordered by Nigeria, Niger, Cameroon and Chad. Boko Haram has continued to attack in these neighbouring countries. In another statement, the military said that security agencies were working to secure the release of school girls kidnapped in Chibok on April 14 last year and other citizens held hostage by the Islamists. “The search for abducted Chibok school girls and the rescue of other Nigerians in hostage has never relapsed…,” military spokesman Colonel Rabe Abubakar said in the statement.

“The military has and will continue to sustain the operation until the entire northeast is cleared of all terrorists and miscreants,” it added.

The abduction of more than 200 school girls from their dormitory triggered international uproar and condemnation. *Source AFP/Yahoo]]>