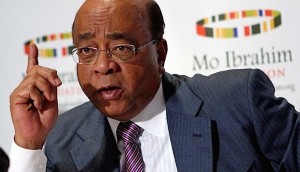 Mo Ibrahim[/caption] Mo Ibrahim is up front and straightforward — with a no-nonsense attitude that may come from the security of being a billionaire. He’s also a man who is passionate about Africa and what needs to be done to tackle some of its greatest challenges, including addressing corruption and ensuring good governance. And he’s not afraid to share his opinions with others, even at the risk of proving unpopular. While most would characterize him as a philanthropist these days — in addition to being a very successful businessman — Ibrahim doesn’t quite identify with the term. That’s in part because he’s skeptical of the impact that his money can have on truly moving the needle on African development, Ibrahim told Devex in a recent interview in Washington, D.C. before he accepted the International Republican Institute’s Freedom Award. “The [gross domestic product] of African countries is $1.5 trillion, how much can philanthropy give?” he said. “We need to focus on the $1.5 trillion. What are those people doing with that? How much of that money is stolen? What sort of hanky panky is taking place?” Good governance depends on sound policies, but the conversation can’t even get started if there isn’t peace. With armed conflict present, Ibrahim said, there cannot be development, adding that securing peace and then combining that with governance and strong institutions the real priority. If that is achieved, he said, there will be no need for charity or philanthropy.

Governance is one of those often seemingly intractable problems — difficult to address and a challenge to measure. It can be tricky territory for development organizations and while they may have a role, Ibrahim said, it is ultimately private citizens that must be mobilized and empowered to hold their governments to account. A first step is ensuring that people have the facts at their disposal — to that end, the Mo Ibrahim Foundation created the Ibrahim Index of African Governance, which uses more than 100 variables to rank African countries’ governance based on performance in four key categories: safety and rule of law, participation and human rights, sustainable economic opportunity, and human development. The latest version was released earlier this month and the news isn’t great. In the last four years progress on governance in Africa has stalled, according to the index. Some 21 countries, including five of the top 10 have deteriorated in overall governance performance since 2011. Topping the list are Mauritius, Cape Verde and Botswana, but all three have shown some declines in the past four years. The bottom of the list isn’t much of a surprise — the Central African Republic, South Sudan and Somalia are the three worst-performing countries.   https://youtu.be/rCbsM5NpBv8

While governance is a people-focused issue, Ibrahim believes that business has to take a stand on corruption too, characterizing it as a “cancer” that poses a big problem for the private sector. “The amount of money lost in Africa is much more than the total amount of aid it receives and that raises some questions,” he said. But it’s not just about bribes and misappropriated money, it’s also about other forms of illicit funds like mispricing. And it is incumbent on the business community to step up. “There is no African leader who is corrupting himself. Corruption needs partners and who are the partners? The partners are business people,” he said. That burden falls partly to the countries where offending companies are based. Ibrahim is unabashed in calling for stricter rules and enforcement. While he praises U.S. efforts through the Foreign Corrupt Practices Act, he is quite critical of Europe, which dragged its feet on similar legislation and has been slow to prosecute. Ibrahim has seen the problem firsthand. His former chief financial officer, a Frenchman, once told him bribes were no problem because they fall under the category of business expenses and are therefore tax exempt. Part of what bothers Ibrahim about this issue is the hypocrisy of developed countries, who lecture African countries on corruption and yet through policies or lack of enforcement contribute to the cycle. His success and wealth have afforded him a platform to tell world leaders just that. One story he shared involved a meeting with German Chancellor Angela Merkel. When conversation turned to corruption and governance, Ibrahim challenged her and asked for a specific example of when her government took action against a German company. When she answered with the example of Siemens, which in 2008 paid $1.6 billion, the largest fine for bribery in modern corporate history at the time, that wasn’t good enough. “I said no. Siemens was taken to court because it corrupted your own society … not for what they’ve done in Sudan or Nigeria,” Ibrahim recounted.

Ibrahim is particularly passionate about Africa’s youth — primarily about unleashing their potential. But he’s also wary of what happens when they don’t have sufficient opportunities. “This is a tsunami of young people coming and you have to deal with it,” he said. “It is their future and this is the largest constituency.” Failing the youth of Africa will lead to instability, he warned. What is needed is training, jobs and to give them a say in politics. Instead of closing borders, developed nations should look to this next generation as potential workers to supplement their own aging populations. But short-term, election-cycle driven politics and a lack of statesmanship is a problem, he said. Outside involvement needs to be focused on support that builds capacity, so that young people can take their mobile phones and increased communication and translate it into successful political organization.

Ibrahim doesn’t want to see a repeat of Egypt, where young people didn’t know how to live what he terms a “normal political life” and broke off into 30 different parties that made it too difficult to organize or win an election. “You had young people motivated, well-connected, educated and then total failure for democracy because people don’t have proper political training,” he said, adding that they didn’t know how to accept one another. Part of the problem is the huge gulf in age between leaders and the growing youth population. And Ibrahim has had enough of presidents pushing 90 years old on an increasingly youthful continent. Barack Obama was aged 47 when he took presidential office. If the U.S., the most powerful country in the world is entrusting the country to young leaders, asked Ibrahim, why aren’t African countries, where being 90 seems to be a qualification? He was only half joking. Indeed, the issue of leadership change irritates Ibrahim and it’s one of the areas in which he’s making a significant investment. His foundation awards an Ibrahim Prize to former African heads of states who left office in the last three years, were democratically elected, served only the constitutionally mandated term and demonstrated excellent leadership. The prize, which could be awarded annually but hasn’t been due to lack of recipients, gives the winner $5 million over the course of 10 years and $200,000 every year for the rest of the leader’s life.

Obama’s Africa legacy is still in the making, but he didn’t engage with Africa until late in his terms of office. While domestic priorities including the financial crisis and health care likely kept him occupied, Ibrahim hoped Obama would engage much earlier. “It’s not a question of aid, it’s a question of the ability of an African-American president — the first in history — to really give leadership,” Ibrahim said. “I think, to a large extent, it’s an opportunity missed.” But Obama has made some progress and is working to help U.S. companies get over their reluctance to invest in Africa, something Ibrahim hopes will change. Last year’s U.S.-Africa Leaders Summit was a step in the right direction. Ibrahim, who attended the summit, said that he heard from presidents and others who have attended summits in France or China that this was one of the most successful. While Chinese summits often have a “bag of goodies” in the form of billions of dollars for a few people, the U.S. summit was different: Obama succeeded, he said, even though he didn’t have anything to offer. “You know why? Your real power is the soft power of this country and when you deploy this soft power you get results,” Ibrahim said. But there have been glimpses of what may have been — and Obama’s speech in Addis Ababa, Ethiopia in July, which Ibrahim described as “amazing,” also provided a glimpse at what might have been. What made the speech special? It was straight-talking and tackled corruption and governance head on, much like Ibrahim’s own mantra. Obama called out African leaders who refuse to step down at the end of their terms and called on them to consider the negative repercussions it has on democracy and growth in their countries. The speech would have had greater impact though, Ibrahim said, if it had been made five to six years earlier to African heads of state. Just by talking to leaders, Obama could have played a major role in the fight for governance and leadership, he added. But Obama’s story is still compelling and raises questions about what might have been if he had returned to live with his father in Kenya rather than staying with his mother in the U.S. and what that says about social mobility, which Ibrahim sees as a big challenge in Africa. “There are a lot of personal lessons in Obama’s life and what is happening, which has been very useful for us, for Africa. I hope he stays engaged with us in Africa, because it would help us a lot,” he said. *Source DEVEX]]>