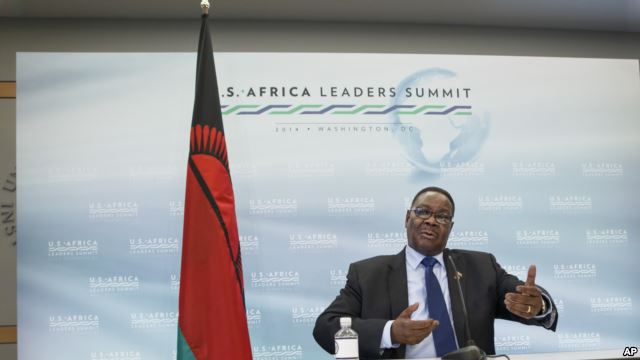 FILE – Malawi’s President Peter Mutharika, August 2015.[/caption] Malawi’s President Arthur Peter Mutharika says his administration is implementing new public management reforms in a bid to weed out corruption by ensuring accountability and preventing financial malfeasance. He says his stance is zero tolerance for corruption, adding that he wants to restore a culture of accountability. Donor support, which accounts for nearly 40 percent of the country’s budget, has been withdrawn after officials were accused of stealing millions of dollars in public funds.  Malawi economists say the country is plagued by high inflation and the fall of the country’s currency, the Kwacha. In an interview with VOA, President Mutharika said the country’s main foreign exchange earner, tobacco, is also facing challenges.  He outlined some of the measures his government is taking to strengthen the economy and the country. “Part of the problem is a weak export base and the other currencies are strong, and in a way I think the Kwacha was over appreciated anyway, so it is probably depreciating to its normal level …  “But In the long term, I would like us to increase our exports and cut back on spending, and I hope that we would be able to get back to where we should be,” said Mutharika. In a cost cutting move, he has restricted local and international travel for all government officials.  Mutharika says the measure will save the government about $20 million. Service Delivery Malawians are experiencing frequent electricity interruptions and tap water shortages, which some say could hurt Mutharika’s re-election bid. Mutharika says his administration is looking at different ways to produce more energy. “With the dry [conditions] and the low levels of water, about 80 percent of electricity cannot be produced, that is a lot.  That is where there is this [load] shedding.  We had a problem with transmission.  Some of the powerlines are extremely old and they lose half of the electricity.  That is why we are working with the Millennium Challenge Corporation of the United States.  In fact, five contracts were signed this week to improve the transmission,” said Mutharika. “Transmission alone without generation is not good, so we have to generate electricity and we are trying to add initially about 300 megawatts, but eventually, 1,000 [megawatts] through a coal fired plant in Malawi near the Mozambique boarder.  We will also complement that with solar …  And also biomass and wind and others.  But the mainstay is going to be hydro, so we would improve that and coal.” Heads of State Pay A report by the African Review, a publication based in Kenya, named Mutharika among the top 10 African presidents with high salary compared to the GDP of their countries. But Mutharika dismissed the assertion his pay hurts the economy.  He says parliament raised the salaries of lawmakers, which by the constitution automatically raises the executive as well. “My salary is 1.5 million Kwacha [per month] and is even less than most of the civil servants.  It is certainly less than the governor of the Central Bank and the CEO of the Malawi Revenue Authority.  It is not that much, I think … it comes to about $3,000 [per month] at the current exchange rate,” said Mutharika. “We are not taking the [increased] money, both me and the vice president and Cabinet ministers.  We are saying we are not going to take the salary until the economy improves. “ Predecessor Mutharika also says he wants to include all political voices.  During his inauguration, he made a gesture of goodwill to his predecessor, former president Joyce Banda. “I extended this olive branch, [but] I cannot go on to beg somebody to work with me if she doesn’t want to, and she doesn’t. … We are making progress, and to me that is what matters rather than individuals” Mutharika said. Banda has been in self-imposed exile for a year due to security concerns.  But Mutharika says his administration is not interested in persecuting individuals or political opponents. “All I have said is that nobody in Malawi is above the law.  And that is if there is anybody involved in Cashgate [corruption] it doesn’t depend on whoever it is he is going to be tried according to the law.  I swore to uphold the law and the constitution of Malawi and that is going to be the case,” Mutharika said.  “I think the time has come in Africa where we have got to stop the scenario of a new president always persecuting the previous president.  It is not a crime to be president, so that has got to stop and I am the one to stop that.” *Source VOA]]>